By Crystal Apilado, Lauren Wooding on November 9, 2001 in LV Life 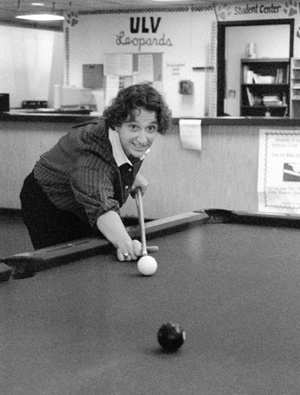 In its mission to find a new director of student affairs, the position previously occupied by Michael Houdyshell, ULV found Deborah Gordon. Fitting into her new Leopard spots should not be too difficult for Gordon, as she has had experience in just about every aspect of student life from coaching basketball to residential life to student affairs. / photo by Lauren Wooding

After five months of anticipation and anxiety, University of La Verne students have a new director of activities.

Deborah Gordon has taken over the position left vacant by by Michael Houdyshell.

The Port Jefferson, N.Y., native has been in California for four months.

“(Scripps) wasn’t a good fit for me,” Gordon said.

She added that she was excited when the opportunity to work at ULV arose.

She said she feels comfortable with this community and her position.

The students and faculty have already made her feel welcome, she said.

“I have a very good feeling about it,” said Gordon.

She said enjoys working with student leaders on campus and hopes to learn more about the University through her interactions with them.

Some of Gordon’s specific duties will include overseeing the commuter program, orientation week, Greek life and to oversee the Associated Students Federation (ASF) Forum.

“My first impression is that they (student leaders) are very motivated,” said Gordon.

She said she hopes that she can help teach student leaders how to more effectively run a student-staffed organization, while keeping it fun at the same time.

She also looks forward to working with former orientation leaders in the upcoming planning of orientation week.

To prepare, Gordon will attend an intensive two-day institute in Tempe, Ariz. sponsored by the National Orientation Directors Association.

She hopes to make the transition, from having no activities director, as smooth as possible for students.

Gordon said she expects to rely on the students to show her the ropes as much as she hopes they will rely on her.

“I’m still learning,” said Gordon. “I’m coming in not knowing the past.”

She said she would like to create a friendly relationship with students.

“We are the fun part of college,” said Gordon.

“It’s about educating and having a good time,” she said.

She said she hopes to eventually use some of the extra space vacated by KULV.

“I want to cosmetically clean up the front desk,” said Gordon.

That would include stocking up with new paint supplies and replacing broken table-tennis raquets and billiard sticks.

Such improvements should be made as quickly as possible, for starters, she said.

Gordon added that she would like to help make the front desk more student-friendly and informal.

She’d also like to see a computer or two in the center so students can check their e-mail while they’re there.

More than half of ULV students live off campus.

Gordon said she would like to create a commuter lounge in one of the student facilities.

After battling the Southern California freeways, commuters should have a place where they can kick back, relax, check their e-mail and feel welcome, she said.

“There’s so much energy during the day,” she said.

Gordon also looks forward to collaborating on events and activities with ULV’s Institute of Multicultural Research and Diversity, she said.

With such a diverse student body, Gordon said, this is huge part of life here.

Gordon received her bachelor of science degree in education in the State University of New York at Cortland.

There she was a “scholar athlete,” she said, having played on the basketball team for four years.

She received her master of theology degree at the Condler School of Theology at Emory University in Georgia.

Between college and graduate school, she taught physical education and health at private schools in both New York and Georgia.

She has also been a college basketball coach at Brandeis University and Emory .

It was while working in student affairs at Emory that she was introduced into the Residential Life Specialist program.

She participated in this for three years.

“It was the foot in the door,”said Gordon.

From that experience she moved to California to work at Scripps and then on to ULV.

In her free time Gordon said she likes to go body-boarding.

She plans to take surfing lessons in the spring.

Gordon has also done a lot of traveling since relocating to the West Coast.

Her family she said also comes to visit her here to explore California with her.

“I’m trying to see as much of Southern California on the weekends,” she said.