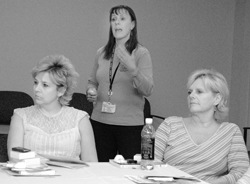 Raising awareness about breast cancer, Martha Osborne, a breast health nurse coordinator at Pomona Valley Hospital Medical Center, spoke Thursday in the President’s Dining Room. Kim Pomierski and Marsha Soboh were among about 20 people who attended, many with personal cancer experiences. The event was hosted by the human resources department. / photo by Emmah Obradovich

To mark Breast Cancer Awareness Month, the human resources department held an educational conference on Oct. 6 to encourage the spread of knowledge and hope with regard to breast cancer.

“I feel that my biggest mission is sharing my story with people,” Delgado said. “I want people to be aware that this is something we need to think about constantly.”

Tables filled with educational materials, chairs decorated with pink balloons and a large plate of pink cookies welcomed the 20 attendees.

“Somewhere in your life you will meet someone who is touched by breast cancer,” Osborne said, as she began her 30-minute speech to the audience of women.

As she clutched a pink ribbon in her hand, she continued to share personal stories about her mother’s fight with breast cancer and the struggles of patients she has helped throughout her 28 years as a breast health educator.

Osborne dispelled many common myths about the different types of cancer.

“The number one killer of women, as far as cancer goes, is lung cancer,” Osborne said. “Statistically, more women are diagnosed with breast cancer than any other cancer, but more women die of lung cancer. That just says the treatments are better for breast cancer.”

Throughout the meeting, Osborne and Delgado stressed the need to be informed and detect any abnormalities early. They also discussed the importance of getting an annual mammogram after the age of 40, performing self-exams and seeing your doctor on a regular basis.

The greatest risks for breast cancer are age, weight, heredity and hormonal activity. A woman who has never had children, is 30 percent or more over her ideal body weight, has a poor diet and smokes would be at a high risk for breast cancer according to the Breast Cancer Resource Committee.

Osborne declared that the audience members were now educators who must share their knowledge with others.

Sherry Delgado ended the meeting with a few inspiring words about her own cancer battle and her new diagnosis that has turned her life upside down.

“I had just celebrated my 10-year anniversary from my first breast cancer,” Delgado said.

“I’ve had to start that roller coaster ride all over again,” she added.

For Delgado and the millions of people affected by cancer, meetings that promote awareness and education are a proactive step in the right direction. As the speech ended, the women of the audience discussed cancer, asked questions and shared personal stories.

“After seeing her courage and everything, mostly I was here to support Sherry,” speech attendant Martina Miraflor said. “Just meeting her has touched my life.”

October is Breast Cancer Awareness month, and hopefully early detection and an increase in survivors will be the result.

Angie Gangi can be reached at agangi@ulv.edu.