By Emmah Obradovich, Laura Bucio on April 1, 2005 in News 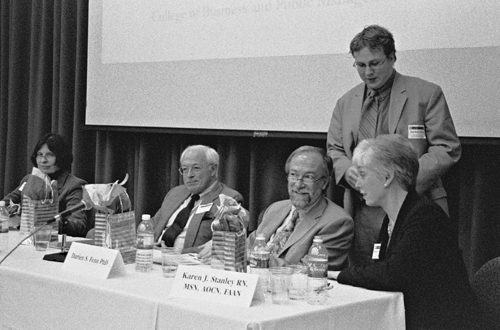 “Oregon has been said to be the best place to die,” said Ann Jackson, Director of the Oregon Hospice Association. The physician assisted suicide lecture attracted many elderly people eager to learn more about end-of-life alternatives. Sponsored in part by the Center for Health and Aging College of Business and Public Management, the panel included Jackson; Ben A. Rich, associated professor of bioethics at the School of Medicine and Law at UC Davis; Darien S. Fenn of Oregon Health Sciences University; Zak Myer, legislative aid for the office of Van Nuys assembly member Lloyd Levine; and Karen J. Stanley, president of Oncology Nursing Society. The panel discussion was held March 23 in La Fetra Hall. / photo by Emmah Obradovich

On March 23, the University of La Verne hosted a distinguished speaker panel to discuss physician aid-in-dying and proposed California legislation modeled after the Oregon Death with Dignity Act.

“This is a very timely topic right now,” said Joan Branin, director for the Center for Health and Aging College of Business and Public Management.

The Center for Health and Aging at the University in collaboration with the Cal Poly Pomona Institute for Ethics and Public Policy, as well as the community Partnership End-of-Life presented the panel of speakers meant to discuss the recently proposed legislation.

The Oregon Death with Dignity Act allows all those who fulfill certain requirements to request physician aid-in-dying.

Some of the requirements are: the patient must be 18 years or older, reside in the state of Oregon, voluntarily request for physician aid-in-dying, submit one written and two verbal requests to the doctor and have a life expectancy of six months or less, said Director of the Oregon Hospice Association Ann Jackson.

“We need to look at what California can do to improve its end-of-life care,” said Levine’s spokesman Zak Meyer.

The panel also discussed some of the myths surrounding physician aid-in-dying.

Some of the myths surrounding the issue include the concern that many patients are not qualified to make a reasonable decision regarding their own end-of-life care, and that passing the proposed legislation would open doors to more drastic changes.

“This will not lead to euthanasia,” said Ben A. Rich, associate professor of bioethics and law at the UC Davis.

“We need to come to terms with this and put myths down,” he said.

Karen Stanley, president of the Oncology Nursing Society, shared some her experiences with patients in California who have asked for physician aid-in-dying but were unable to get it.

“My obligation is to make sure there is not one need that is not met,” Stanely said.

By the end of the night, many of the attendants were convinced that the legislation was needed in California.

“This legislation would offer people a choice,” Branin said.

“In 15 to 20 years it is going to be a very big issue,” said Christine Rizzuti, attendant to the event. “It’s time we stop hiding death and recognize it’s a part of living,”