By Emmah Obradovich, Sarah Weaver on April 22, 2005 in Sports, Tennis 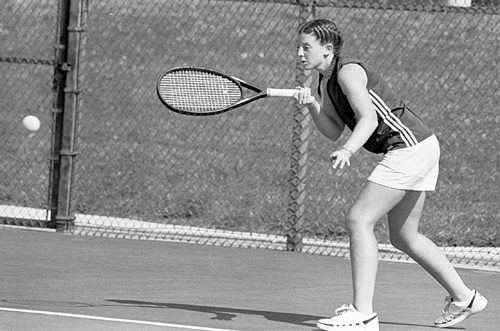 Their overall record is 5-9, 4-6 SCIAC. The SCIAC tournament was a two-day battle with La Verne bumping up one spot in the conference. This is the first fifth place finish in the history of the women’s team.

“If SCIAC works the way it usually does we’ll start out against Cal Lu,” head coach Brian Harrison said.

Friday the Leopards started the tournament against the No. 3 seed Cal Lu at Claremont, La Verne lost all three doubles giving Cal Lu three points. Once the Regals took two of the singles matches, the game was called and Cal Lu got the win.

Later that day La Verne had a dominating match over Caltech defeating them, 8-1.

The Leopards won all three doubles and five out of six singles matches. During a game point in the No. 1 doubles, sophomore Jessica Baker’s cell phone rang and the official called it a “deliberate hindrance” and gave Caltech the point, but that didn’t stop this dynamic duo from coming back to easily take the match.

“She really picked up her game and came through with the win,” senior Chrissy Zehrbach said.

La Verne went into the SCIAC tournament as the No. 6 seed hoping to move up in the rankings.

“Overall, we have a good opportunity to go up one spot. That would be a good way to end the season,” Harrison said.

Saturday La Verne matched up against Pomona-Pitzer at the home courts in Claremont. La Verne finally got a victory over

Pomona-Pitzer, a victory neither men’s or women’s tennis have ever experienced. After the heartbreaking loss two weeks ago to Pomona-Pitzer, 5-4, La Verne gained redemption by the same margin, 5-4.

“We had a lot more energy and we wanted it a lot more because we lost so close last time,” Zehrbach said.

“It was the best I have ever seen Jess play,” senior Lacy Cascadden said. “I was so proud of her.”

Even though the Leopards won’t be going to the postseason Ojai tournament, they are happy with their season. La Verne will say goodbye to Cascadden, Michelle Fontanez and Michelle Tang

“It’s sad to think it’s over, but there really couldn’t be a better way to leave,” Cascadden said.