By Angie Marcos, Sherazad Shaikh on March 6, 2009 in News 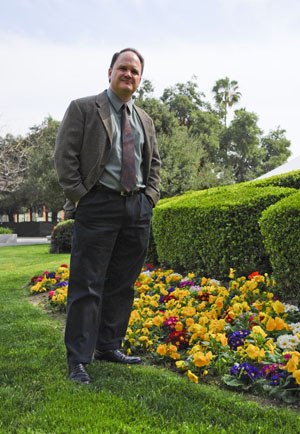 Richard Gelm, who published his first book, “Politics and Religious Authority” in 1994, has been teaching in the history and political science department since 1991. Gelm, a self-described San Diego Padres fan, has served as department chair since 1997. / photo by Sherazad Shaikh

Richard Gelm, professor of political science and the chairman of the history and political science department for the past nine years, has published “How American Politics Works: Philosophy, Pragmatism, Personality and Profit.”

For several years Gelm, who received his doctorate in political science at UC Davis, worked on and off on the book, which has recently been published by Cambridge Scholars Publishing;

Gelm himself is the only person with the final hardcopy as of now.

“I had the desire to write it because many people are critical of the American political system,” Gelm said.

He said that the four subtitles included in the title of the book are the different components that pull on us in American politics.

He wished to look at how politics works with these four different pulls.

“I tried to resolve this paradox people have with the American political system,” Gelm said.

He said that the country needs key figures or individuals to lead the people.

Gelm added that many are wary of American political systems because too many individuals go into politics for wealth and power, forcing them to become corrupt individuals.

“I think it’s an excellent book,” said Kristin Howland, the history and political science department secretary. “It puts the whole American system in a way that everyone can understand and appreciate,” Howland said. When writing the book Gelm observed how all different components of the American political system, such as the Constitution, Congress and the President, work in the real world.

He said that observing the presidential election system of the United States, which is one of the most complicated in the world, led him to believe that the system has changed drastically since the days of the founding fathers.

“It’s not something you design from scratch. It has obviously evolved,” Gelm said.

Stephen Sayles, a history professor, read the draft of the book and said it was very well written.

“The sections on federalism are very good and useful to students,” Sayles said.

Sayles said that he liked that Gelm talked about Supreme Court cases in the book.

He also liked that Gelm gave background on certain things within our government systems.

“It is very accessible to students,” Sayles said.

Howland also agreed that the book was easy to read by anyone with any amount of knowledge on the topic.

Former Sen. George McGovern, who wrote a supporting statement for Gelm’s book, first met Gelm years ago when he came to give a speech at the University of La Verne.

Though they kept in touch through letters over the years, they met in person once again last spring when he visited ULV.

“I’ve been an admirer of him my whole life,” Gelm said.

He decided to give McGovern a copy of his manuscript, which Gelm said McGovern highly approved of and even offered to write an endorsement statement, which is now printed on the back of the book.