By Kevin Garrity, Sherazad Shaikh on March 6, 2009 in Sports, Tennis 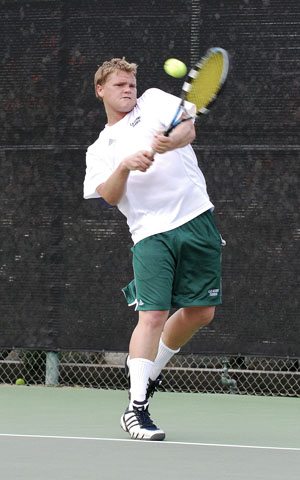 A valiant effort in the last match brought senior Richard Delgado as close as he would get to winning against the Chapman Panthers. The Leopards were de-clawed by the Panthers, 7-2. / photo by Sherazad Shaikh

The men’s tennis team tried to upset Chapman last Friday, but fell short despite a victory by the Leopards’ No. 1 doubles team.

La Verne lost the match, 7-2, which it hosted at the Claremont Club, but showed signs of progress, especially from the senior duo of Richard Delgado and Alex Muresan who upset Chapman’s No. 1 doubles team.

“It was a great regional win for our No. 1 doubles team,” head coach Don Flora said. “(Chapman) is a great team and this victory is a sign of progress from our guys who are trying to reach their goals.”

Delgado and Muresan won the first game, but trailed the rest of the match until they were down a break point. They won the point to force a 7-7 tie.

The tie-breaker belonged to Delgado and Muresan, who synced up when it counted and came out with a 7-7 (7-4) victory.

“When we were down a break point we were able to put it together and force a tiebreaker,” Delgado said. “We worked well together and this win should prove promising for the future.”

The other two doubles matches did not bounce ULV’s way as both points went to Chapman. The team of Nick Mitzenmacher and Mark Rivas lost, 8-0, and Adrian Laygo and Joe Matsuoka lost, 8-3.

In singles play the Leopards sent Laygo to center court to take on Clifford Yook, Chapman’s No. 1 player. Yook proved to be too much as he took the match (6-0, 6-0).

The only singles victory for the Leopards came from Muresan who defeated Leland Buttle (6-3, 6-4).

“(He) is a former teammate who beat me last year so I wanted to come out and get some revenge,” said Muresan. “My serve was strong today and I stayed patient which was why I won the match.”

Chapman came out victorious in every other singles match, securing their commanding win. However, Flora was optimistic after the match and saw signs of progress from his players.

“We are training hard every day and starting to see individual progress,” Flora said. “We are playing in one of the toughest regions in the country. Three of our conference teams are in the top 20 nationally, but today showed we are headed in the right direction.”