By Aaron Braunwalder, Sherazad Shaikh on May 8, 2009 in Sports, Volleyball 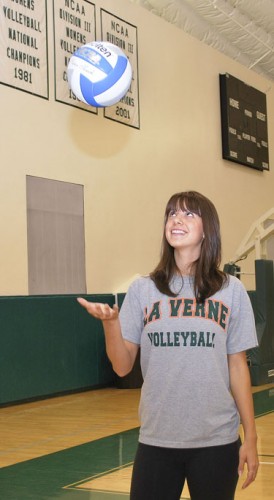 Brianna Gonzales was named one of this year’s National Strength and Conditioning Association award winners. She has played volleyball at La Verne for four years as an outside hitter and is graduating with a major in psychology. After graduation Gonzales plans to take time off to play beach volleyball before attending graduate school. / photo by Sherazad Shaikh

The award recognizes the student-athletes’ dedication to strength training and conditioning.

Gonzales was also awarded All-American honors for the second consecutive year for volleyball.

Gonzales was nominated by strength and conditioning coach Matt Durant.

Gonzales is one of the 207 nationally selected student-athletes to receive the NSCA award.

“This award is not just given, you have to earn it,” strength and conditioning coach Matt Durant said.

“It means a lot that Durant would consider me for this award. To make him proud is a big deal,” Gonzales said.

Gonzales started her athletic career at La Verne as a dual athlete, participating in track and volleyball for her freshman and sophomore years.

Gonzales trained with Durant during her track seasons and was always looking for ways to improve herself athletically.

“A lot of athletes come in here and are only willing to do what it takes to get by, but Brianna was always looking for something extra to do,” Durant said.

After deciding to give volleyball her full attention, Gonzales developed as a player and quickly became a leader on and off the court.

“She’s a coach’s dream, she works her butt off, she has really worked herself and has earned everything that she has accomplished,” Durant said.

It is Gonzales’ work ethic that sets her apart from the regular athlete; it is her drive and determination that has made her a better athlete and more importantly a leader and a role model on and off the court.

“It feels good to be recognized for my hard work, but I have to give credit to coach Durant and my teammates. Being a part of a hardworking team makes it so much easier to be better,” Gonzales said.

In Gonzales’ volleyball career at La Verne, she is a two-time First Team All-American voted on by the American Volleyball Coaches Associat­ion.

She is also a two-time Southern California Interco­llegiate Athletic Conference (SCIAC) Player of the Year.

She helped lead the Leopards to a ninth consecutive SCIAC crown and a runner-up finish at the NCAA Championships during the 2008 season.

“I would encourage all athletes to embrace every challenge you are faced with and believe in yourself,” Gonzales said.

Gonzales will also be graduating this spring with a bachelor’s degree in psychology and plans on attending graduate school in the near future.

“She will be very, very missed. You can’t replace someone like Brianna, you can only hope other players will learn from her and pick up the slack along the way,” Durant said.