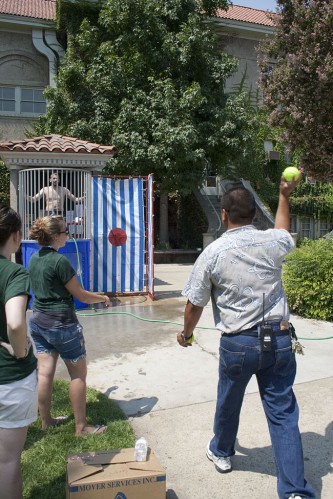 Shane Rodrigues, radio-TV operations manager, tests his aim at the dunk tank with Chris Weedon, OWL coordinator, inside. Sponsored by the OWLS, Campus Activities and Student Life, the Laverna­palooza Club Fair and All-La Verne Picnic was a hot spot for students on Sept. 2. The event included free food, music and carnival games. / photo by Cindy Harder

The annual club fair is held the first week of classes in the semester.

The main focus of the event is to gather all of the students together and the food offered is meant to unite everyone at the University, Take­tomo said.

The All-La Verne Picnic started immediately following the University Convocation and had upbeat hip-hop music playing during the event.

All who attended the Convocation were invited to stay for the picnic for a free lunch to enjoy.

“I like the University a lot. Actually, I love it,” freshman Alyssa Contreras said.

After reviewing many of the available clubs to join on campus, Contreras said the debate team seemed the most appealing to her.

“The fair is really laid back and the food is great,” Contreras said of the club fair and All-La Verne Picnic.

“Even though there was a long line for food, I only had to wait for about five minutes,” Contreras said.

A club also in attendance of the fair was the Order of Omega Honors Society.

This club in particular is only available by application of the top three percent of Greeks.

“We review all of the applications once a year for membership,” said Ann Marie Francis, senior business administration major and president of the society.