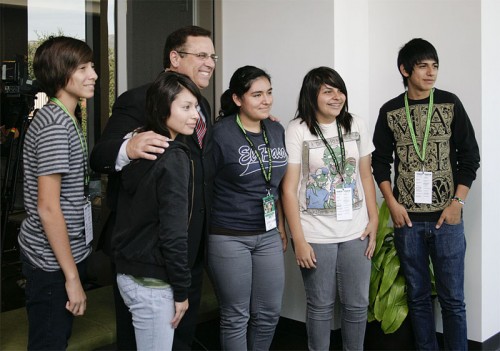 High schools and community colleges from throughout the area were invited.

Besides Amezcua’s address, the students got to choose two among the 10 workshops offered by communications department faculty.

Though the highlight of the day was Amezcua’s talk.

“Each one of you, if you really want to do what I do, can do it on your own,” Amezcua said. “If you’re persistent, you will be successful.”

“This place has everything you need to do it on your own,” he added.

Despite the changes, he said he believes that anyone can take the form of a citizen journalist by using Facebook, blogs or even Twitter to tell the news stories that need to be told.

Amezcua said there are more challenges for those going into journalism now than there were in 1985 as evidence of the increasing number of those graduating.

“The public doesn’t demand much of us. What I’m hoping is you demand more of the media,” Amezcua told the audience. “The most important thing is to be honest, to be truthful… to have a dream.”

Amezcua also shared many personal stories with the audience throughout his keynote address and spent time answering students’ questions.

“Speaking in front of people is frightening to me,” Amezcua said, who has won numerous awards for his work.

“Emmys are one thing, but when you help someone improve their life – that is very rewarding and the essence of what a reporter should do,” he added said.

“He’s professional and I thought he showed a human essence,” said ULV President Stephen Morgan, who introduced the Amezcua to the audience. “He really embraced the University of La Verne.”

“I thought it was great. It makes me want to push more. It’s encouraging,” said Naohmi Monroe who visited ULV from Diamond Ranch High School in Pomona.

Among the special workshops, Alex Vasquez, a ULV graduate and an NBC photojournalist, told students about covering breaking news through his own experience.

He presented a room full of high school students with video footage of fire coverage he had shot that was used on a NBC telecast.

“La Verne has such a strong communications program,” Vasquez said.

“I hope that they take away that the news isn’t just what they see on TV. News is the real reality TV.”

“One of the things we hope that they take from this is an enriching experience other than just sitting in a classroom,” Pellegrini said. “The school we come from is a low socioeconomic school. A lot of the kids don’t think they can go to college. This is going to be a great experience for them.”

In all, 51 high schools and community colleges visited the University for Communications Day.