By Ashley Lyn Sourapas, Denisse Leung on September 23, 2011 in News 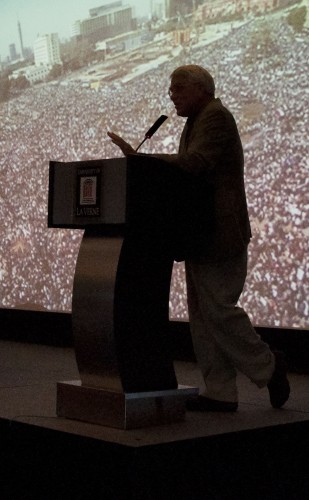 Showing slides from his most recent trip, Mark Juergensmeyer, director of the Orfalea Center of Global and International Studies at University of California at Santa Barbara, describes the nature of a peaceful gathering of pro-democracy demonstrators in Tahrir Square in Cairo, Egypt, that soon enough toppled the government of president Hosni Mubarak. / photo by Denisse Leung

Mark Juergensmeyer, director of the Orfalea Center for Global and International Studies at the University of California at Santa Barbara, spoke to the ULV community about the war on terror last Thursday in the Campus Center.

Juergens­meyer has dedicated the past 20 years to studying the religious conflicts.

His talk, “Is the War on Terror Over?” part of the Uni­versity’s 9/11 Retrospective series of events,  Juergensmeyer talked about the world post-9/11 and how religion factors in.

Juergensmeyer also discussed how the capture and death of Osama bin Laden was a victory for the United States.

This small victory, Juergensmeyer said, means that our nation has won a small battle in the war on terror.

“We killed one man, but there are still a lot of other terrorists in the world,” freshman psychology major Ashlee Meyer said.

Students who attended later reflected on the war on terror.

Many had strong opinions and felt that the war on terror is not over.

“War is still going on and we are still trying to recover from Sept. 11 10 years later,” psychology major Kate Hoching said.

“(The war on terror) is not over because America likes to go and invade other countries,” sophomore Drusila Rivas said.

“It could have all been prevented if we had just focused on ourselves.”

Juergensmeyer shared stories of his travels to Cairo, Egypt the previous week.

The next morning, Juergensmeyer said, the area was flooded with people.

“It felt more like a festival than a protest,” Juergensmeyer said.

Nowadays people can take a photo or stream anything and within seconds it can become viral.

Later that evening, the protest was shown on the news because it appeared to have turned violent.

However, the violence and the destruction that newscasters were referring to had actually happened a large distance from where the actual protest was taking place.

According to Juergensmeyer, it was suspicious how the story changed on the news.

After Juergensmeyer finished his lecture, a panel of educated professionals reflected on the topic and also asked questions.

“Religion is an organizing principle,” navy intelligence officer Timothy Doorey said. “Who are the winners and losers, it’s too soon to tell.”

One thing is obvious, though: the war on terror still continues.