By Bernarda Carranza, Daniel Hargis on March 7, 2014 in LV Life 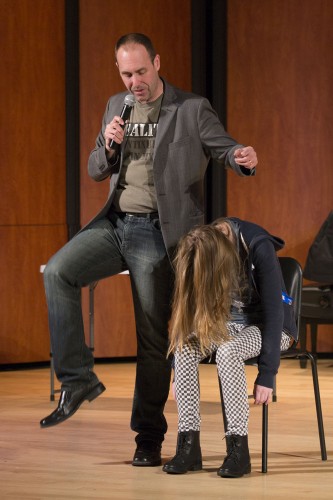 Mentalist Chris Carter awakens freshman legal studies major Ashley Hoffman from hypnosis, pretending to inflate her body with an air pump under his foot. Carter, named Entertainer of the Year by Campus Activities Magazine in 2005 and 2006, has performed around college campuses for 19 years. Carter performed Tuesday in Morgan Auditorium. / photo by Daniel Hargis

The title of mentalist after Christopher Carter’s name brings a lot of skepticism to those who do not believe such a thing is possible, but on Tuesday not only did he prove the cynics wrong, he also blew the audience’s mind.

He attempted to perceive and read the minds of approximately 30 students present at Morgan Auditorium. His opening act was simple and standard, a card trick. Tossing the deck around to four people in the audience, he asked that each one of them pick a card and memorize it. None of them said a word, yet by observing them and watching their reaction he managed to guess each individual card. He was just getting started.

“I’ve been watching you all like a hawk,” Carter said.

Carter proceeded to figure out the name of a student’s first crush by just looking into her eyes, or by hypnotizing a girl on stage.

“When you go down you start to feel like you’re resting,” said Ashley Hoffman, freshman and legal studies major. “Once he tells you to go to sleep you really feel like you are sleeping. I heard you guys, I heard him say: “she can hear you.” I hear everything but I am completely asleep.”

The audience gasped when they saw Hoffman fall asleep on stage in a matter of seconds. Carter woke her up, handed her a book and asked her to open up a random page and call out the word that stands out to her. Without hesitation she opened page 273 and “danger” was the word she chose.

Carter showed the audience that in fact, page 273 had been ripped out and that Hoffman had been sitting on an envelope the entire time. She opened the envelope and to audience’s anticipated guess, it was the ripped page and the word “danger” had already been circled.

His numerous acts, all increasing in suspense and confusion were “warm ups,” as he called it, leading to the final one.

“I think of it as kind of a Sherlock Holmes process,” Carter said. “I’m working with a lot of different techniques, interviewing techniques. I spent the whole early part of the show carefully watching and observing and I am setting people up for what comes later.”

Every member of the audience wrote down on an index card their full name, a number and a question they had about their future. Carter covered his eyes in duct tape and used a blindfold to ensure the audience he could not see. He proceeded to reach for a card and by just touching it he managed to figure out the name of the person and provide information about them that only people close to them knew. In one instance, he knew that a student had almost drowned at the age of four.

“What you are seeing here has a lot of theater built around it,” Carter said. “It’s not really what it appears to be. It’s me utilizing things that I have guessed about before and reading them out in the context of the show.”

Nevertheless, the audience was enticed and baffled.

“I was scared he would reveal all my secrets,” said freshman biology major Genesis Lopez.

“Unfortunately there were a lot of events tonight so not a lot of people showed up,” said Campus Activities Board comedy chairwoman Estrellita Guzman. “But it was a really fun and energized crowd.”

Mackay dives into LV record books
Letter to the Editor