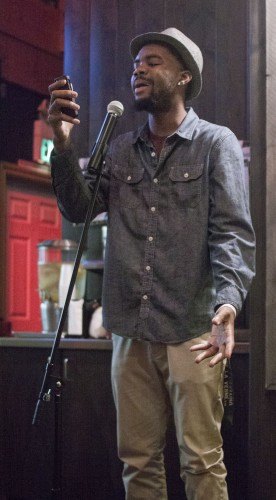 Senior liberal arts major Mathieu Koontz recited a poem at the spoken word plays open mike night on April 17. The club holds an open mic night one Thursday a month at Pappa’s Artisanal, where anyone is welcome to sing, recite poetry, and in some cases even tell jokes. / photo by Stephanie Ball

Pappa’s Artisanal served something more than a fine menu as it opened its doors to ULV’s Spoken Wordplay Open Mic night, on April 17.

Maguill addressed a young audience that is consumed by technology and less interested in art.

“So get out of your house and off of your couch, come and hear the voice of where those stories come from,” she said.

As the sign-up sheet was passed around, the place started to fill up with students waiting to perform or be in the audience.

The poem that talked about senior criminology major and president of Spoken Wordplay Myron Woods’ personal hardships and struggles was the first to open the night.

“Life is like a game of poker,” he began.

“I documented my life when I felt like the world was against me,” Woods said.

“I felt like the odds were against me and I was really getting into poker. I chose to use my mom and my dad as representation of my opponents. They felt like my greatest opponents even though they were supposed to be my closest family members.”

The night continued with poems about love, heart-break, obesity, society’s fixation on a woman’s weight, peer pressure, religion and insomnia.

There were also two rap performances, as well as a cover of “Killing Me Softly” by The Fugees.

The crowd looked confused as an audience member got up to perform with nothing prepared.

He proceeded to take out his phone and read his tweets out loud getting a few laughs.

“You never know what you’re going to get with open mics, that’s why I love them,” said Woods.

Magill, the feature poet of the evening, performed a set of five of her poems, “What’s not fair?” “Pretty Girls,” “Ballerina Poem,” “Mistress” and a persona-poem as the voice of Dr. Seuss to the 43 publishers that denied him before his first book was published.

“Dr. Seuss is amazing to me because he was a man that created a language when it didn’t exist for children to still be able to imagine and develop and be creative,” Magill said.

“When the whole world was like this doesn’t make any sense, what the hell is a flopsnapper,” Magill said.

She opened her set talking about the importance of communication and supporting poetry.

“When you come to venues like this, even if you’re not reading, encourage your pupils, your peers because that’s how we keep these things going and keep safe space,” Magill said.

“That’s what we need to make sure happens, if not we’re all going to be sitting on the couch getting obese and constipated as the poet said earlier on a bunch of bullsh*t and French fries, which I happen to enjoy,” Magill said.

The evening ended with senior criminology major and poet Sasha Jones with a poem about her mother.

“Poetry is my soul, poetry is life. Poetry is everything that I can’t (just) say to anybody. Like this poem (about her mother) I’m not just going to go to a random person and say ‘hey I went through all this stuff,’” she said.

“But poetry gives me an opportunity to me to speak my mind and I know people are going to listen. Poetry to me means that I can help someone else without me touching them. Literally,” Jones said.

“You can relate to a lot of the poems, for example ‘Pretty Girls,’ it’s true, we might look fine on the outside but inside we’re hurting,” said freshman biology major Genesis Lopez.

Pappa’s Artisanal staff announced that they stayed and worked over their shifts just for the event, and a collection plate was passed around with voluntary donations for the staff.