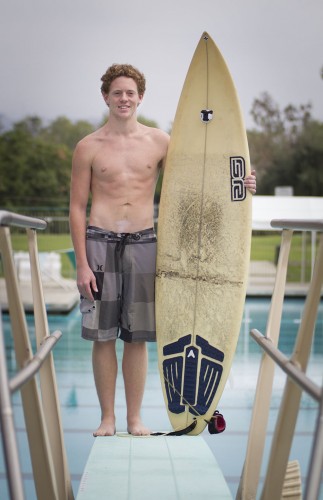 When sophomore athletic training major Scott Mackay is not practicing his three-meter dives or breaking school records, he spends his free time in the ocean surfing. / photo by Jessica Harsen

Sophomore diver Scott Mackay stands tall on the diving board, staring down at the pool of the Brenda Aquatic Center in Commerce.

He has done the same three meter dive all season long. However, this is the Southern California Intercollegiate Ath­letic Conference championship meet and Mackay knows this is his biggest dive yet.

“I just tell myself to relax and have fun with it,” Mackay said. “I’ve done this dive a thousand times.”

Mackay had a record-setting performance at the Swimming and Diving SCIAC Champion­ships in Commerce last month.

Mackay broke the school record for his three-meter dive with a preliminary score of 486.75 and a final score of 488.85.

This placed Mackay second overall for that event. Mackay’s preliminary one-meter dive score of 430.35 set a school record as well.

“He had a great meet and dove real well,” head swimming and diving coach Pat Skehan said. “It was his best meet by far.”

Mackay’s scores qualified him to compete in the NCAA Division III Regional meet on Feb. 28 and March 1.

Mackay finished fourth in the three-meter dive event posting a score of 426.90.

Mackay and teammate Jacob Tittl were the first Leopard divers to compete at the NCAA Regional meet in recent memory.

Although Mackay’s regional meet scores did not qualify him for the NCAA Division III National meet, his coaches were pleased with his growth and improvement this season.

“It was a culmination of an entire of season of work,” assistant swimming and diving coach Jim Luci said. “It was what we’ve been working toward.”

Mackay grew up in Upland and attended Upland High School, where he was a member in swimming and diving and the water polo team.

Mackay is also an attacker on the men’s water polo team.

Mackay lives in the water as he enjoys surfing in his spare time.

“Even as a kid growing up in our neighborhood pool I was swimming with friends,” Mackay said. “We would go every day in the summer.”

He also would like to work in sports therapy.

Mackay has returned to his roots, coaching the dive team at his high school.

He is also a role model for his fellow Leopard swimmers and divers.

“He is always trying to help his teammates,” Luci said. “He leads by example.”

Mackay’s goal is to compete in the NCAA Division III Swimming and Diving National Champ­ionships.

“There is definitely room for improvement,” Mackay said. “I can’t wait to see what two more years of hard, intense training will do. The sky is the limit.”