By Jennifer Jackson, Kaung Myat Tun on December 5, 2014 in News 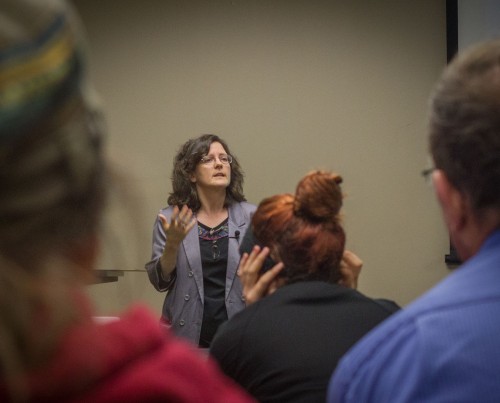 Dr. Christine Broussard, professor of biology at the University of La Verne, gave a lecture on her research focusing on the effects of toxicants on the development of T cells in the immune system. Dr. Broussard graduated in Microbiology from Louisiana State University Baton Rogue, earned her Master’s from Veterinary Medical Sciences, and her doctorate in Immunology from University of Texas Southwestern Medical Center. The lecture took place Monday, Dec. 1 at the President’s Dining Room. / photo by Kaung Myat Tun

Christine Broussard, professor of biology, presented the adverse effects of environmental toxicants on the development of children’s immune systems Monday in the President’s Dining Room.

Her lecture, titled “Embryonic thymocyte responsiveness to HPTE is dependent upon concurrent TCR signaling, but not estrogen receptor signaling,” educated students and faculty on her research from the last five years.

“Environmental toxicants, the things in the environment we are exposed to, have the potential to harm developing immune systems,” she said.

Endocrine disrupting chemicals are exogenous chemicals that interfere with bodily functions such as the reproductive, neural and immune system. They have been known to cause disorders and abnormalities in addition to breast and cervical cancer.

On the site, there is a list of more than 70,000 personal care products indicating the health concerns and hazards associated with them.

Broussard then shared how the chemical structures of endocrine disruptors are similar, which indicates effects on the human body could be similar.

“There have been papers reporting that children exposed to some of these chemicals have repeated ear infections and have a poor vaccine response than the control group who were not exposed,” Broussard said. “About 10 percent of children in the U.S. have been shown to have asthma which is a drastic increase, historically, that cannot be explained by genetics.”

There is an increase in pesticide use and food residue and the government allows more than 70 new pesticides a year with only two-thirds meeting EPA’s safer pesticide criteria.

According to Broussard, children between the ages of one and five who eat conventional food are exposed to about 20 different pesticides a day, but there are no government standards to protect from the daily multiple pesticide exposure.

Broussard collaborated with undergraduates and post-baccalaureates, along with one high school student for her research.

They concluded that exposure to endocrine disruptive chemicals alter viability and differentiation of embryonic thymocytes, which exposure to these chemicals can negatively affect the developing fetus’ immune system.

“I thought tying the relevance of hard data with research was very important,” Traci Ramirez, sophomore biology student, said. “She did a really good job of tying the significance to those who don’t understand such complex terms, by turning an advanced idea into more general terms.”

Her research informed students on the negative effects of products used daily.

“We don’t know a lot of the ingredients that are in the products we are using,” Brittany Machado, senior psychology student, said. “Researching this topic is important so we know what’s in it so we can

stop using them and create policies to prohibit their use.”