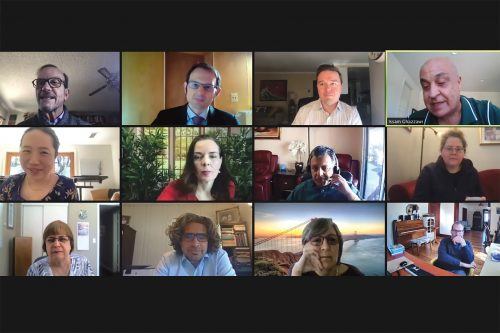 Panelists, moderators and audience members at the La Verne Academy Roundtable on Research introduce themselves at the event Tuesday via Zoom. In the top row, from left, are Al Clark, Giacomo Laffranchini, Ronald Hallet and Issam Ghazzawi. In the middle row, from left, are Grace Zhao, Louise Kelly, Avo Kechichian and Jane Beal. In the bottom row, from left, are Marcia Godwin, Jason Neidleman, Seta Whitby and Reed Gratz. Godwin and Ghazzawi were the two leading moderators, while Laffranchini, Hallet, Zhao and Kelly were part of the panel. / screenshot by Rachel Kendrick

La Verne Academy members Marcia Godwin, professor of public administration, and Issam Ghazzawi, professor of management, hosted a virtual roundtable forum on how to conduct research on Tuesday at the faculty lecture held over Zoom.

The discussion began with each panelist discussing their areas of research, then sharing the dos and don’ts of maintaining productivity in research.

“The more consistent you are the more likely it is that you will be able to maintain productivity,” said Laffranchini, whose research involves examining the borderline between strategy and entrepreneurship with a focus on entrepreneurship at the micro-level, specifically on family business and international management.

Laffranchini also recommends long-range planning, which he explained as using data sets that can develop into a stream of research instead of a single paper.

“Working on multiple projects that interrelate enables you to significantly increase your productivity,” said Laffranchini.

Hallet said that research should be actionable. He said there should be a positive influence on the participants and for them to know that the research will try to create a positive change.

“I don’t want to marginalize my participants any more than they already are through my research,” said Hallett.

His research involves two areas: how to improve access and success for students experiencing homelessness, and how to create a new framework to increase college success for low-income background students.

Kelly, whose research involves integrating the hard side of strategy with the soft side of leadership, said that the research you conduct should be personal and be meaningful to you.

The panelists also shared how they identify whether their scholarly work is effective.

Hallet said to start with asking what’s effective and what it means to be effective in research.

“For me, sometimes effectiveness is helping a population that’s been invisible be seen for the first time and heard,” Hallet said.

He said that other times it’s moving the needle on policy.

Martinez’s research involves Chicano theater and its impact in the United States. She said that timeliness makes her work effective since a lot of the territory is unexplored.

“If I can add value to this realm of conversation, that’s when I feel I’m being effective,” Zhao said.

Her work involves music and well-being, specifically how music can aid human flourishing and how musicians can benefit from well-being programs.

The lecture ended with faculty giving feedback on how to improve research initiatives from an administrative standpoint.

“I think if we really had the message of all the cool work that our professors are doing in terms of research and creativity it’s unbelievable the impact it would have,” said Kelly.