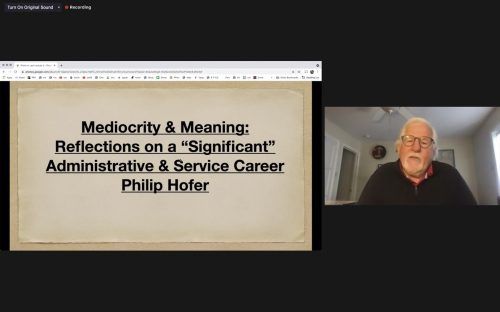 Philip Hofer, administrator emeritus, lectures on finding meaning and growth in places that are viewed as mediocre or average on Tuesday at his last lecture. Hofer, who worked at the University of La Verne for 14 years, was invited back to give his last lecture as part of the faculty lecture series nine years after he retired. / screenshot by Rachel Kendrick

Philip Hofer, administrator emeritus, reflected on his experience and place with the University of La Verne at his lecture, “Mediocrity and Meaning: Reflections on a ‘Significant’ Administrative and Service Career,” Tuesday via Zoom.

Hofer returned nine years after his retirement to give his last lecture to an audience of 29 people including faculty, staff and students. He spent 14 years at ULV, from 1998-2012, as director of the International and Study Abroad Center.

“Almost nine years after I retired, to give a last lecture… it’s quite a gift to give to someone who really didn’t lecture in his profession,” Hofer said.

Hofer turned over some of his time to Jordi Casinos, his friend and former student, to lecture as well.

Hofer said he and Casinos met in 2001 through the Brethren Colleges Abroad program at La Verne where the two became friends for life. Casinos called Hofer his oldest friend.

The first question Casinos asked Hofer was why he titled his lecture as “mediocre.”

Hofer cited a recent article he read in The Atlantic by Caitlin Flanagan that argues that private universities have become “obscene” because they breed entitlement and entrench inequality while they pretend to be engines of social change.

Hofer explained that even his own education, while a remarkable feat, was completed in average settings. He says that he has been involved with average people throughout his career adding that while the University of La Verne is great, it is not considered one of the elites of the world.

“I reflect on that and on my own formation and in the context of what I know about the world I realize how fortunate I am.” Hofer said. “Even in so-called mediocre environments one can be excellent and one nurtures excellence and so it’s that juxtaposition that I was trying to get at in the title.”

The two discussed why he decided to go into international development and his purpose.

Hofer says that his formation on that issue came from a fundamental missionary who showed him slides of people in Nigeria. This he says implanted an interest in international development.

“The idea of working and serving an international context remained with me after graduating. Rather than going into radio and television, I chose to go to Nigeria and teach,” Hofer said.

Since retirement Hofer has been playing tennis, golfing and producing his podcast “Getting to Know You,” which is available on Google Podcasts.

“(He is an) all-around kind and gentle soul devoted to social justice in a hands-on personal way,” Jack Meek, professor of public administration, said.

Kenneth Marcus, professor of history, said that he worked with Hofer on the International Studies Institute committee.

“The way you organized the International Education Week that was the highlight of the year, it was wonderful to interact with you and anything international you were the go to person,” Marcus said.