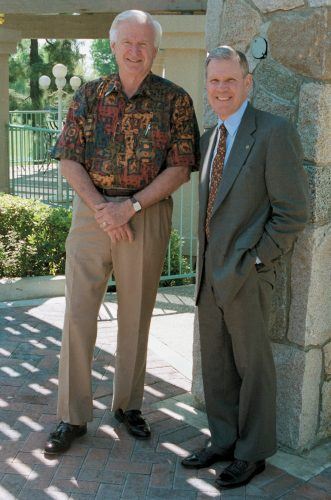 Benjamin Harris, left, poses with former University of La Verne President Stephen Morgan in 2002. Harris, who died March 5, was a major benefactor of the University and a member of the board of trustees for 39 years. / file photo by Manuel Hernandez

Benjamin C. Harris, former chairman of the University of La Verne Board of Trustees, died on March 5 from Parkinson’s Disease. He was 87.

“Everyone on the board loved being around him because he worked collaboratively with all members,” Lieberman said, adding that Mr. Harris had a great sense of humor.

In 2002, Mr. Harris and his wife were awarded the University of La Verne President’s Award for their commitment and generosity to the University. In 2006, Mr. Harris was awarded an honorary ULV doctorate of humane letters.

After graduating from college, Mr. Harris and his twin brother worked together for their family business, the Harris Fence Company in Long Beach.

Mr. Harris married his wife, Barbara, in 1977. They worked and  traveled the world together.

The success of their business allowed them to make donations to many institutions besides ULV, including Whittier College, the John Wayne Cancer Center and the Orange County Performing Arts Center.

Mr. Harris first joined the ULV Board in 1979, and he retired in 2018, at which time his stepdaughter, Kimberly Bowen, took his place.

ULV Trustee Emmett Terrell said Mr. Harris was dedicated to the University, and he treated his fellow board members like family.

“Although Ben’s main priority was his (own) family, he cared a lot about ULV,” Terrell said.

Mr. Harris contributed financially and oversaw the construction of The Oaks dormitory and the Wilson Library. He and his wife also donated toward the Sara and Michael Abraham Campus Center.

Al Clark, professor of humanities, said Mr. Harris was an exceptional businessman and human being.

“Even if Mr. Harris was a businessperson, he was also a philanthropist,” Clark said. “He was always seeking to help those around him.”

Mr. Harris also created the University’s Barbara Harris Scholarship in sociology, in memory of his wife.

The Harris Art Gallery in the Landis Academic Center and the Barbara’s Place café in the campus center were also dedicated to Harris and his wife for their generous donations.

Andrea Molina can be reached at andrea.molinamartinez@laverne.edu.