By Sarah Weaver, Yelena Ovcharenko on May 20, 2005 in Sports, Tennis 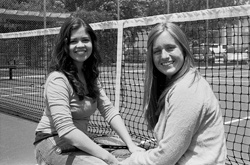 Michelle Fontanez and Lacy Cascadden are two of the three seniors on this year’s tennis team, who have represented the Leopards for four years. This year was marked with the first victory over Pomona-Pitzer in the history of women’s tennis. As a result, the Leopards finished fifth in SCIAC, the highest ranking the team has had in the last four years. / photo by Yelena Ovcharenko

Sarah Weaver
Staff Writer On May 28, the University of La Verne will say goodbye to three of its star athletes. Michelle Fontanez, Michelle Tang and Lacy Cascadden are all graduating.

These three women have many achievements to be proud of: one of these is the fact that each participated in a collegiate sport for all four years of her college career.

“These are a great group of women,” athletic director Chris Ragsdale said. “I enjoyed watching them play.”

The University will have a special senior recognition dinner for all athletes who have been with the athletic program for at least three of their four years on May 19, where the athletes will receive ULV blankets with their names embroidered.

All three women have also been acknowledged for being scholar athletes, which means they’ve achieved higher than 3.5 grade point averages last semester.

As part of the La Verne tennis team, they had a great culminating experience beating Pomona-Pitzer, 5-4, in the Southern California Intercollegiate Athletic Conference this year, which placed them at the No. 5 position in the conference.

“As a coach I couldn’t ask for a better end to a season and the collegiate careers of the three four-year players,” head coach Brian Harrison said.

Harrison has been the women’s tennis coach for the past four years.

“I’ve been lucky enough to work with these girls for four years,” Harrison said. “They’re the first group that I’ve taught that I’m seeing leave.”

The transition will be tough for all parties involved.

“Brian was the best coach a player could ever have,” Fontanez said. “He made the game of tennis fun. I will miss him.”

Cascadden said she felt that Harrison really knew how to coach her specifically.

“He knew when to help, or when to leave me alone, or when to make me laugh,” Cascadden said. “He is more than a tennis coach, he is a tennis player, he still loves the game for the game, and that makes a difference.”

Harrison returns their respect. He said he feels lucky to have been a part of their lives.

“My favorite part about coaching these girls has been watching each player develop and mature on and off the court,” Harrison said.

“It’s been such a great experience coaching three young ladies from when they came in as little freshman to seeing them mature and start planning their careers and post college endeavors,” Harrison said.

Tang, who is from Saigon, Vietnam, is getting her degree in liberal studies with a biology concentration.

She is also the assistant store manager of Abercrombie and Fitch.

She is dedicated to work and self-sufficiency. She lives on her own and supports herself, while still managing to be fun and bubbly.

“Michelle is very smart and so much fun,” Cascadden said. “She is outgoing and always happy to see you.”

Tang also loves tennis and plans on entering some tournaments in the future.

“Michelle was a great partner,” Fontanez said. “She was really dedicated to the game and that was very inspiring.”

“As an athlete, Michelle was very hard-working, she practiced hard in the off season as well as during the season,” Harrison said. “She is very aloof on the court which gave her opponents the impression that this girl is serious about playing tennis.”

Tang’s favorite memory of La Verne tennis was beating Pomona-Pitzer at the end of the season.

Cascadden, a communications major, is from Alta Loma, and is known as a kind-hearted person.

“She was known for killing her opponents with kindness,” Harrison said. “I have never seen a tennis player as kind and courteous as Lacy.”

“Lacy always made me laugh in practice. She is just a good-hearted person,” Fontanez said.

Cascadden is a kid at heart and loves to surf, rock climb and eat anything chocolate. She has extremely supportive parents who have helped her get through some rough patches.

Growing up she put a lot of energy into tennis because when she plays she doesn’t have to worry about anything but the game and herself.

“Lacy’s athletic quality was to fight hard and never quit,” Harrison said. “She always appeared to be in the match regardless of the score because she would fight until the very last point.”

Fontanez, an accounting major from West Covina, is a sweet individual who is always smiling.

She currently works as an accountant for a small firm in San Dimas and is passionate about one day working for the FBI.

She has an extremely optimistic attitude about life.

“Tomorrow is not guaranteed so we need to take advantages of opportunities,” Fontanez said. “I live my life to the fullest as best I can.”

On the courts she has the same fight for the game as she does in life.

“Michelle is a fighter on the courts, she goes for every ball,” Tang said.

“On the tennis courts Michelle has been one of the team’s come through players,” Harrison said.

Fontanez also has a unique way of celebrating a great point with a fist pump.

All three of these women have distinctive qualities and different backgrounds, but came together as a team on the La Verne tennis courts.

They will all miss the game of tennis and the friendships they have made along the way.

“There is so much that I am going to miss about these girls I couldn’t possibly list them all,” Harrison said. “I’ll miss the sing-a-longs to the radio and the road-trip gossip.

“The No. 1 thing that I will miss about the girls are their personalities,” Harrison added. “As a coach, I can always recruit a player to fill a position in the team, but I can’t replace personalities.”