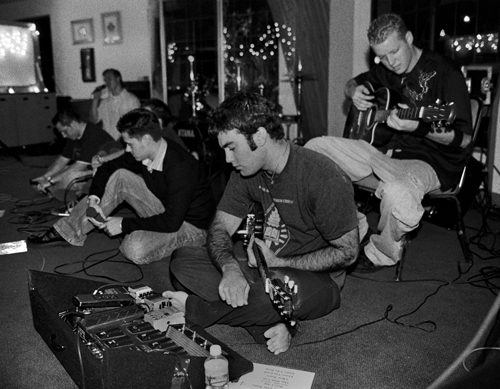 The band Sanctified played Saturday night at the Leap of Faith Youth Miniseries event at the Faith Lutheran Church in San Dimas. Band members Darrel Gotto, Michael Nation, Gabriel Schwartz, Michael Gotto, Sean Trichter and Josh Turcotte took a few moments between songs to pray with the audience. The mission of the group is to provide a place where people can learn about God. / photo by Adam Omernik

Bands spiced things up at the Saturday evening coffee house by including songs they had written. Teens poured into the Faith Lutheran Church’s Parish Hall as the local church band, Road Crew, and a guest band, Sanctified, jammed to all time favorite worship songs.

The audience was very receptive to the bands.

“It’s been such a blessing to have them,” said Jennifer Elrod, Faith Lutheran Church youth leader.

Previously, the youth group had organized coffee houses, but none had a turnout this big. About 70 people attended the Saturday event.

Nikki Price, coordinator of Leap of Faith ministries, saw this outreach as an opportunity for current youth members to get involved and to see what the youth in the area needs and wants in the community.

“The mission of the group is to provide an atmosphere of fellowship where students can commit to growth through worship and training,” Price said.

Price hopes the coffee house can be a place where be develop and understand the purpose God has for their lives. Even though the youth group had previously hosted coffee houses, none had a Bible study following it.

Rick Warren’s book, “Purpose Driven Life: What on Earth Am I Here For?,” kindled the expansion of the youth group. While reading the book, Price was determined to find a purpose in her life and in the lives of others.

The book questions the goals and dreams of an individual and compares them to God’s plan for every person.

As the night progressed, the band and audience members shared their testimonies with each other.

Elrod elaborated on how Sanctified completely turned her life around.

“I was at a point at my life where I didn’t know what to do. I needed to change my life,” Elrod said. “They have this essence of light that shines through.”

When the band took a pause, Josh Turcotte, a member of Sanctified, shared his testimony and unveiled his soul to the audience.

He spoke of his previous double life that tied him into drinking uncontrollably and doing drugs while being the youth leader at his church.

Turoctte said that all seemed to go well until his life came crashing down on him.

He was kicked out of school, laid off at work and dismissed from his youth leader position at church.

Soon after, Turcotte found new Christ-driven friends that were starting a band. They included him in the group. Turcotte viewed his new friends as Godly men.

He said the band shifted through his paradigm on life because he witnessed their strength and faith in God. He said that without God all people are as worthless as a grain of sand .

As the evening came to an end Sanctified called the audience to its knees and surrendered all to God.

Gabriel Schwartz, Sanctified band singer, was overwhelmed with joy because he saw the true inner selves of individuals letting go as they opened up to God.

“We came not expecting anything,” said Leap of Faith member Tori Leonard.

“Let’s build God’s church here on earth,” Turcotte said. “Give of yourself and see the miracles he does. It’s amazing.”

Unlike the coffee house that had an outstanding turnout rate, only seven showed up for the lesson. Leap of Faith hopes that as their regular bible study meetings at 6 p.m. on Sundays continue, their group will grow.

“I’m happy because I’m doing all the things that he’s designated for me to do,” Price said in describing her relationship with God.

The youth group plans to make their coffee house a regular event as well.

The evening of the first Saturday of every month is designated for this occasion.

Yelena Ovcharenko can be reached at yovcharenko@ulv.edu.