By Veronica Garcia, Yelena Ovcharenko on November 19, 2004 in LV Life 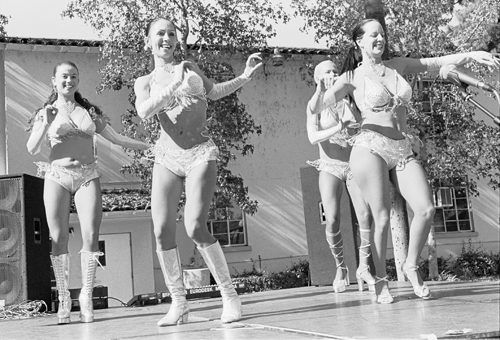 Kimberly, Katia, Daisy and Lloni of Salsa de Carnival performed at the Latin Festival, sponsored by the Latino Student Forum, on Wednesday in the University Mall. Many students gathered to eat ethnic food and explore the cultures of different Latin countries including Panama, Puerto Rico, Guatemala, Cuba, Mexico and El Salvador. / photo by Veronica Garcia

Dancers, food, and informational booths lined the University of La Verne’s Quad as students gathered from 11:30 p.m. to 1 p.m. on Wednesday at the Latino Festival to celebrate the independence of Latino countries.

This was the first year that the Latino Student Forum hosted its annual Latino Festival in November. This event was previously celebrated in September.

Salsa de Carnival, a Brazilian dance group lit up the stage with feather head dresses, sparkling bikinis, laced boots and smiles. Katia, Kimberly, Daisy, and Llonia, the queens of Samba, gave the audience a taste of Brazil by shaking, twisting and turning to the beat.

The audience cheered on as the divas continued to dance.

During intermission Wendt challenged viewers to get up on stage and display their Salsa moves.

Even though talented dancers dominated the stage, they were not the only attraction.

Food played a delicious role in this festival as well. Beef machacas, horchata, tortillas, chips and churros were several of the mouth-watering cultural dishes served at the event. The authentic dishes allowed Latinos to take pride in their culture’s food.

Rivas’ favorite part of her culture is the food – pupusas in particular. “That’s what Salvadorians are known for,” Rivas said.

“We have a big variety of food and here they have hot dogs and hamburgers,” said Valeria Troya, psychology junior major and foreign exchange student from Ecuador.

This was the chance for Latinos to inform the University about their similar yet diverse cultures.

Overall, the Latino Festival gave a better overview of Latin America to the University students.

“I think it shows that the definition of Latino doesn’t necessarily mean we come from the same country,” said Jaime Pulido, a senior music major.

Yelena Ovcharenko can be reached at yovcharenko@ulv.edu.

Letters to the Editor
Musicántica offers taste of Italy