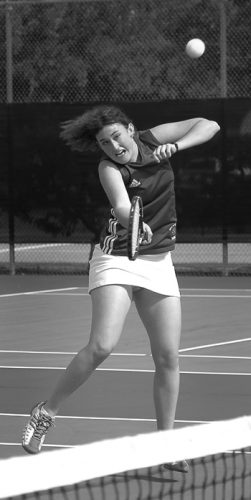 Playing hard in a doubles match against Redlands, sophomore Jessica Baker returns a volley at the Blickenstaff Tennis Pavilion. Baker and her partner, senior Lacy Cascadden, did their best against the Bulldogs, but lost their match. La Verne’s three doubles teams gave up the bone to the Bulldogs, 9-0. Despite their rough start, the Leopards have a positive outlook for the season. / photo by Reina Santa Cruz

University of La Verne lost its second match at the Blickenstaff Tennis Pavilion Saturday to Redlands, 9-0.

After rain delayed their 9:30 a.m. match, ULV met up with Redlands for a 1 p.m. start. The Leopards lost all three doubles matches and their six singles matches.

The No. 1 doubles team sophomore Jessica Baker and senior Lacy Cascadden lost, 4-8. The women had a slow start but began to pick up games towards the end of the match.

Unfortunately, it was not enough to save the set but they are excited to meet up against Redlands later this season.

The second doubles match-up senior Michelle Tang and senior Michelle Fontanez also lost with a score of 2-8, and at three first season senior Chrissy Zehrbach and sophomore Katie Nash finished it off with a 0-8 loss.

“We went out and gave it our all,” said Cascadden. “We are excited because we have the highest caliber team that we have ever had. It’s tough to start the season out by playing a team like Redlands, they are one of the top in the division.”

The singles match started with the number one spot, Baker, who lost 2-6, 0-6.

Cascadden was second with a 2-6, 1-6 loss. Sophomore Alisa Nadjalian, Fontanez, Zehrbach and Nash were also defeated in their singles matches.

The Leopards won their first match against Cal State San Bernardino, 6-3, on Feb. 1. This is the first time La Verne women’s tennis has won the first match of the season. It was also the Leopards’ first win over a Div. II School.

“We swept the doubles number one, two, and three. Nadjalian, Fontanez and Badkoubei won their matches. It’s a great win to beat a school in a better division,” Harrison said.

Last year, the Leopards tied for fifth place in their division.

“In terms of ULV tennis it was probably the best season ever,” Harrison said. “The girls are ready and anxious starting this new season; they have new skills and are refining them as a team.”

“This year should be good. We lost a couple of good players but we picked up some girls that filled the spots well,” Harrison said. “We’re better now.”

The next match is Feb. 26 against Occidental.

Sarah Weaver can be reached at sarahulv@ hotmail.com.