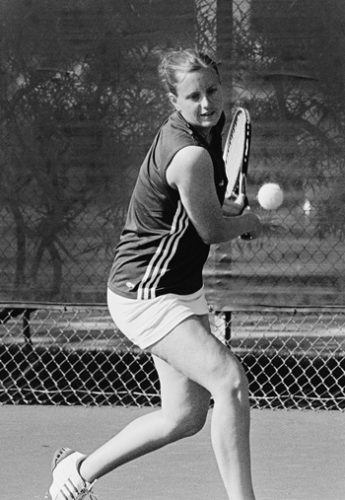 On a return to Beaver opponent Diana Lin, Leopard Lacy Cascadden tries for another win for ULV at Friday’s match against Caltech. Cascadden took the singles match in straight sets, 6-1, 6-1. ULV defeated Caltech overall, dropping only one match to end with a score of 8-1. The Leopards’ victory over Caltech has been their first since the beginning of the season when they defeated Cal State San Bernardino on Feb. 2. / photo by Gloria Diaz

The Leopards were victorious over Caltech at the Nancy Blickenstaff Tennis Pavilion in La Verne Friday, 8-1.

“I’m confident today,” head coach Brian Harrison said. “Physically we have a stronger team and if everyone holds up mentally we should do well.”

La Verne (2-8) swept the doubles matches and proved early on they were the stronger team.

Sophomore Jessica Baker and senior Lacy Cascadden won their doubles match, 8-3, at the No. 1 spot.

“We’ve been working on poaching in practice and we implemented it today, and it paid off,” Baker said.

At No. 3, senior Chrissy Zehrbach and junior Alisa Najaryan finished the sweep, 8-4.

Friday was the first time Zehrbach and Najaryan played together.

“We compliment each other’s strengths,” Zehrbach said. “We make a good team; I would like to play with her again.”

The Leopards then carried those wins into their singles matches.

“After sweeping doubles it takes a lot of the pressure off the singles matches,” Harrison said.

“It’s exciting to sweep doubles because it gives the girls momentum going into their matches,” Zehrbach said.

“Caltech hasn’t ever been a match that we worry about, but even with that in mind, we still have to have the mental game to match our skills,” said senior Lacy Cascadden.

The Leopards face their final home game today at 2 p.m. at the Nancy Blickenstaff Tennis Pavilion.

“If we do good against Occidental, Whittier and Pomona we have a chance of finishing fourth this season,” Harrison said.

Today will be Cascadden, Fontanez and Tang’s last home match. All three women have played tennis for La Verne for four years and are graduating this May.

“They’re the first group that I’ve taught that I’m seeing leave,” Harrison said. “As a coach its been such a great experience coaching three young ladies from when they came in as little freshmen to seeing them mature and start planning their post college endeavors.”

These three women have been very influential people on the tennis team as a whole.

“I really respect them as players,” Zehrbach said. “Especially at practice they’re really encouraging and help me out with my game.”

The Leopards are hoping to finish strong and be able to enter the Southern California Intercollegiate Athletic Conference tournament with confidence.

With only one week remaining in their season, the women are focusing on the tournament ahead and having a strong team and individual presence.

The women face Pomona-Pitzer today at 2 p.m. at Blickenstaff Pavilion.

The SCIAC tournament will be held next Friday and Saturday in Claremont, beginning at 9:30 a.m. both days.