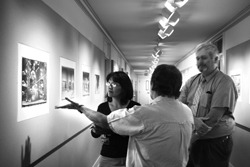 Born in 1979 in rural Nebraska, Fairbanks attended Stanford University on a wrestling scholarship. After graduating with his bachelor’s degree in Art and Science, Technology & Society, he went to Mexico to teach photography and wrestle. The “Luchar es Crear” photographs are bold and real, bringing the viewer into a pop culture phenomenon of sport and theater

The photographs show the seriousness of the sport in the Latin American culture. The photographs portray a day in the life of a Lucha Libre wrestler and the dedication these men have for the sport.

“It shows the love of the sport and why it is worth celebrating,” Duru said.

Some of the photographs also include live action shots of wrestlers in action in the ring; jumping in the air and crashing on their opponents.

“The wrestling culture in Mexico is profound,” said Gary Colby, professor of photography. “It is an old tradition that predates World Wrestling Entertainment.”

Each photograph’s content has a respected feel to it. One can look through the photographer’s eye and feel the dedication Fairbanks has for the popular sport.

“It’s how football is in America,” Duru said. “It’s popular and everyone gets into it. It’s raw but live.”

In the photograph titled, “Arena Naucalpan, 2001” it shows a wrestler touching the face of a baby. It vividly shows the influence and importance of the wrestlers in the lives of the spectators.

The same can be said about the photograph titled, “Arena Puebla, 2001” where two children are wearing traditional wrestling masks. It is evident through the photograph that the men that make the sport thrilling in their lives have influenced the children who watch them.

“The masked characters assume an identity and are modeled after nature and stories,” Colby said. “They’re a component of being human.”

To see more of Fairbanks’ photographs on the Lucha Libra Mexicana, visit the Carlson Gallery, open from Monday to Friday, 9 a.m. to 9 p.m. Admission is free.