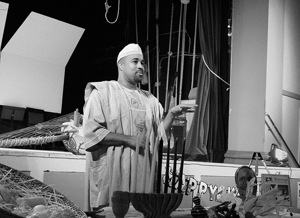 The Mosaic Cultural Institute in collaboration with the Coalition for Diversity, the African American Student Alliance, Brothers Forum and the Sister Circle presented the “2005 Kwanzaa Celebration.”

The celebration began with a brief introduction by Associate Professor of Religion and Philosophy Richard Rose.

She followed this with two poems. One of the poems was titled, “I woke up this morning,” and the other was “He is music,” which was written in dedication to a music professor.

“I didn’t even know what Kwanzaa was,” said senior behavioral science major Maggie Roa. “I learned a lot.”

Kwanzaa is a non-religious African American celebration that lasts from Dec. 26 to Jan.1, which focuses on family, community and culture.

It originated in 1966 when Maulana Karenga, a professor and chairman of Black Studies at California State University, Long Beach, created Kwanzaa to help African Americans reconnect with their ancestors.

“We complain about how much they have taken away from us,” Baba said, “but how much do we work to put it back together.”

Baba explained the symbolism involved in the Kwanzaa celebration.

The Kwanzaa set and decorations include a mkeka, or a mat which symbolizes the foundation. There is also the mazao, or crops.

These are represented by ears of corn placed on the mkeka and serve to represent the children in the household.

Usually, an extra ear of corn is placed to represent the children in the community.

“All children belong to all of us,” Baba said.

“When you believe that all children belong to all of us you won’t suffer the consequences of selfishness,” he added.

“Seven is the number of completion,” Baba said.

These seven candles represent the seven principles Kwanzaa is based on: Unity, self determination, collective work and responsibility, cooperative economics, purpose, creativity and faith.

“We are all born with a purpose,” Baba said.

“Seek creativity in your lives daily,” he added.

Each night a different candle is lit and the appropriate principle is discussed.

The candles stay lit until the end of Kwanzaa. Kwanzaa is a time for family to reinforce their bonds and give thanks.

“I like how it was about life and bringing back the past,” she added.