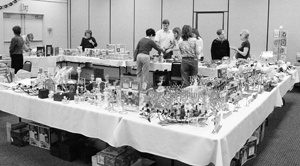 To prepare for Hanukkah, the Temple Beth Israel gift store, located on Garey Avenue in Pomona, held its ninth annual Hanukkah bazaar on Nov. 20. Calendars, toys, jewelry, dolls, music CDs, and books were among the many items that were on sale during the event. / photo by Kourtney Brumfield

Books about Hanukkah, such as children’s books and cookbooks, children’s toys and jewelry were just some of the items on sale at Temple Beth Israel’s ninth annual Hanukkah bazaar on Nov. 20.

“I’ve been shopping for it since July,” said Elaine Saffan, a teacher at Bonita High School, who ran the event for the Pomona temple.

Saffan ordered many of the items on sale through the temple’s gift store.

Hanukkias, also known as menorahs, which hold the candles lit for each of the eight nights of Hanukkah, were also on sale.

The candles used with the hanukkias along with other religious items were also available just in time for people to purchase and to use to celebrate Hanukkah, which falls this year on Dec. 26.

Hanukkah, also known as the festival of lights, is a Jewish holiday commemorating the victory of the Maccabees over the Syrians in a revolt that took place around 165 BCE.

To celebrate, children are given a gift every day for the eight days of the holiday.

Teachers at the temple were able to purchase items for their classes, including toy dreidels –  four-sided spinning tops with letters in Hebrew inscribed on each side.

Saffan said that preparations for the bazaar began the day before.

“I enjoy working with members of the temple; its like a community,” Saffan said. “I enjoy shopping and picking out things that people will like to buy.”

Members of the temple and the community took advantage of the sale and purchased items to celebrate Hanukkah in their homes.

“Usually I like it because you can get decorations,” Beth Taylor, a shopper, said.

Taylor, who is also a member of the temple, came with her mother who was purchasing items to make gift bags for the holiday.

Some members of the temple’s women’s group, the sisterhood, not only shopped for the holiday but also worked at the event.

“It’s a good opportunity to buy things for Hanukkah,” said Karen Salter-Moss, who was selling jewelry.

The annual event always falls about a month before Hanukkah.

The sisterhood volunteers time in order to help out at the temple as well as bring the female members together.

“It raises money for the good of the temple,” Lisa Bloch, co-president of the sisterhood said of the annual bazaar.

Bloch, as well as Janet Beezy, co-president of the sisterhood, said that the sisterhood allows the women of the temple to come together and participate in events such as the bazaar that are held at the temple.

Proceeds from the bazaar go directly to the temple.

Among other things the money raised is used for scholarships.

Marilee Lorusso can be reached at mlorusso@ulv.edu

When will the ‘Mystery Train’ ride end?
Foundation to sue Sony for privacy violation