By Francine Gobert, Sheila DelCastillo on October 5, 2007 in News 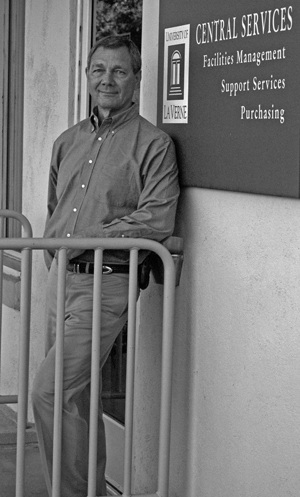 The University’s new director of facilities management David Koch received his bachelor’s degree in communications from the University of Iowa. He previously worked as a consultant to various universities, including the California State University System and George Washington University. After two months at La Verne, Koch said he “sincerely enjoys the La Verne neighborhood” and he is looking forward to improving the appearance of the campus. / photo by Sheila DelCastillo

A new face to grace the campus of the University of La Verne is none other than David Koch, the new director of facilities management.

His impressive background and enthusiasm for the University make him the perfect fit for his new position.

Koch began his work with the University in February, when he took the job as a consultant for construction.

“I knew that after the second or third day this job worried me,” Koch said. “I liked it too much.”

He was asked to become a candidate for the position after working only a few short months by Executive Vice President Phil Hawkey.

Koch was hired and has been working full-time since July.

Koch, who is originally from the Midwest, graduated from the University of Iowa, where he earned his bachelor’s degree in communications.

He made his first visit to California in 1962, during his junior year where he took some time off from the University of Iowa and attended Cal State Fullerton.

During that time he also worked for Disneyland.

“I went to Cal State Fullerton for a year and half and was five credits away from graduation,” Koch said.

Koch had home in his mind and wanted to finish his degree where he started, so he found himself back at the University of Iowa.

Once Koch graduated he decided to come back to California where he landed a job doing publicity for Disneyland.

He worked in publicity for eight years and eventually became an operations supervisor for Disney.

“I discovered that I liked working with people and Disney gave me the opportunity,” Koch said.

Working for Disney, a company where image is very important and where they pay close attention to detail, helped to instill values that Koch still possess and has carried along with him throughout his career.

“I learned to do things right,” Koch said.

Koch still enjoys going to Disneyland where he says he met his wife who was an ambassador for Disney.

“There are great great memories at Disney and working there affected my whole career,” Koch said.

Koch’s career in construction and facilities began when he took a position in property management at the Irvine Company, where he worked for 10 years.

His résumé also includes working for such companies as Wells Fargo, a firm that managed apartments, and Trammell Crow Company, where he worked in property management.

When he came back to the United States he ran into Roger Hardy, who is now the deputy vice president for major projects and campus development.

Hardy and Koch worked as consultants for the same company.

Now, the two work for the University and are members of the master planning team.

“We are very lucky to get him,” Hardy said. “He is very experienced in facilities both in the private sector and non-profit.”

Hardy said Koch brings maturity to the University, which is important to have when dealing with facilities and campus construction.

“My goal is to raise the level of how the campus looks,” Koch said.

He hopes to bring all of his career experience and incorporate here at La Verne to make the campus look better.

This includes enhancing such facilities as the Campus Center for current and future students, staff and faculty of ULV.

Francine Gobert can be reached at fgobert@ulv.edu.