By Sheila DelCastillo, Sher Porter on November 9, 2007 in LV Life 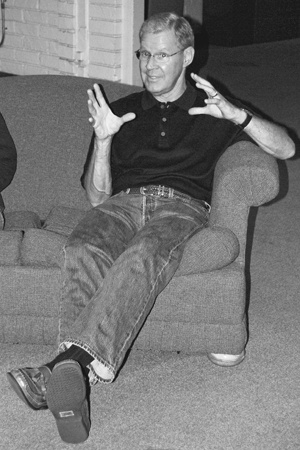 University of La Verne President Stephen Morgan was the guest of honor on Nov. 1 as “21 Questions with Stephen Morgan” was held in the Stu-Han lounge. Students gathered around and asked Morgan personal questions about his undergraduate experience at La Verne, how he met his wife, his current hobbies and plans for the future of University of La Verne. / photo by Sheila DelCastillo

Students were able to see the softer side of President Stephen Morgan Nov. 1 as he answered a series of personal questions during a Stu-Han event.

About 25 students gathered in the middle area of Stu-Han to play a round of 21 Questions with Morgan.

The event was hosted by senior psychology major Ashley Joseph.

“I think it went great,” Joseph said. “People were actually asking questions. I thought it was different.”

Instead of Morgan standing behind a podium, taking questions from the audience, he sat among the students and answered personal questions.

There were three couches set up in a circle where students and Morgan sat. Those who could not fit on the couches either stood or sat on the floor.

Unlike the typical questions about tuition, housing and financial aid, students asked questions such as “What is your pet peeve?,” which happens to be those who litter, especially on campus.

Joseph, resident assistant for wings one and five in Stu-Han, was required to have an event with her faculty fellow, Morgan.

She thought it might be fun to see Morgan on a more personal level.

Questions ranged from “What was your first car?” to “How did you propose to your wife?” to “Were you a ladies man in college?”

Morgan said his first car was a bright red Chevrolet pick up, and he was quite the opposite of a ladies man and was more of a shy guy.

He answered all the questions except for one, which happened to be “What is your biggest secret?”

Students laughed and were able to see a different side of Morgan.

At that moment he was not a superior, he was a person.

Some of the more general facts that students learned about Morgan is that he is a Gemini, born June 2, has been married 38 years, has one daughter and one granddaughter.

Students even learned more colorful facts about him, including his Halloween costume which he was a mouse complete with a nose, tail and whiskers.

“I went all out,” Morgan said.

Morgan also revealed that he prefers bagged chips over Pringles.

“I never thought chips should be in a tube. It doesn’t seem right,” Morgan said.

Some of the funnier answers came from questions about his college life.

One of his regrets in college was that he was shy around women. If he could relive it all again, he said that he would have dated more.

The funniest moments were when he talked about him and his wife before they were married.

After meeting his wife in Davenport after being dared to start a conversation with her, they had their first date and vowed to never speak to each other again.

Later, he approached her again and they married and became husband and wife a year later.

“My wife is my best friend… because we spend so much time together,” Morgan said.

He even gave some historical facts about the school.

When he went to school here, it was seen as offensive for students to paint the Rock. It was always painted green with orange lettering.

It was not until the 1970s when students were allowed to paint the Rock for organizations.

Morgan even believes that Stu-Han, along with Founders Hall, is haunted.

“It’s old and there’s so many people living here, it’s got to be haunted,” Morgan said.

When the students were finished asking questions, Morgan asked the students one question, “What would you like to see changed?” Each student answered and some gave more than one answer.

They asked for improved communication between students and faculty and between departments, better food in Davenport Dining Hall, new facilities and better equipment for the biology department.

These were only some of the answers.

Morgan left right after the event, but not before taking a picture with Joseph.

Hip hop gets the drop
Dorm keen to meaning of dreams