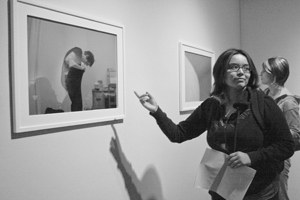 Junior communications major Kellie Salmeron attends the reception for “Pixel: Digital Works by the Departments of Art and Art History” on Oct. 30, standing before Stephanie Hutin’s “Carmen The Elder, Parts One and Two.” Curator Dion Johnson asked each of the faculty members from the art, art history and photography departments to create a new piece of work to display in the annual faculty exhibition. This year, each artist made work for a common 24-inch inkjet printer, so they were all working within the same medium. The exhibit will remain on display in the Harris Gallery until Nov. 20. / photo by Catherine Campos

The Harris Art Gallery has made itself home to “Pixel,” an art collection of digital works by the faculty of art, photography and art history at the University of La Verne. The exhibition will be on display thru Nov. 20.

On Oct. 30 a group of more than 40 students gathered at the gallery to view the images.

“What the faculty is doing is really working,” Dion Johnson, the art department manager and curator, said. He had the idea to display the faculty’s work.

“I wanted to share that with the University’s community,” Johnson said.

While all the participants came from different art making emphases, each produced his or her work with a large format pigment inkjet printer. This means they all had to utilize digital photography in some form for their pieces.

“Different people’s personality stand out,” Laptseva said about the individual works of art. “There is not one theme.”

Holland, professor of photography, took his photographs in Japan.

“The first image looks busy and chaotic with masses of humanity, but on the contrary the people move like a well oiled machine,” Holland wrote in his artist statement.

Anita Bunn, a photography instructor, has one picture in the show, “Swelter,” a photograph of the top of a tree and a cloudy blue-gray sky.

She said she was thrilled to have so many students come to the reception.

Bunn’s inspiration for the picture derives from a philosophical stance she takes about what things mean to her.

“It’s really about looking away from the spectacle,” she said. “Where are the moments where I am allowed to pause.”

Bunn took the photograph in Colorado during the summer. Her mother was sick during the time and Bunn went to visit her. The photograph reflects what she was feeling at the time of taking it. She said this was an unusual piece for her because her previous works have been about living in L.A.

Gary Colby, professor of photography, had photographs featured called “Six Toy Soldiers.” The photos were taken of toy soldiers enlarged so that their facial expressions can be seen clearly.

“I take pictures to see what things look like as pictures,” Colby said.

The soldiers have details Colby said he had never noticed before.

“Their faces can perceive features of their characters by enlarging them,” he said.

“I’m interested in how things look flattened,” Colby said. “These toy soldiers symbolize how flat our lives are.”

For Johnson, his artwork “Moonlight,” was the chance to experience a different art form.

He manipulated his painting using photography, something “new to me,” he said.

“The work is very innovated,” Colby said. “Everyone was motivated to do this.”

“Everyone who participated did a wonderful job,” Johnson said.

Maria J. Velasco can be reached at mvelasco@ulv.edu.