By Catherine Campos, Dan Sayles on October 26, 2007 in Baseball, Sports 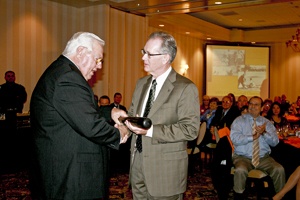 In 1972 the La Verne College baseball team played David Lispcomb University in the NAIA World Series and came out as national champions. The coach for that team was Ben Hines. Hines later worked for the Los Angeles Dodgers from 1985-1986 as a batting instructor and again in 1988-1993 as first base coach. At the Homecoming Dinner and Dance on Oct. 19, Hines was presented by Athletic Director Chris Ragsdale with a special edition baseball bat, signed by each player from the 1972 team. The event was held at the Sheraton Fairplex Hotel in Pomona. Hines is also a 1994 inductee to the ULV Athletic Hall of Fame. / photo by Catherine Campos

Legendary University of La Verne baseball coach Ben Hines was honored at the Home­coming Dinner and Dance on Oct. 19.

The event took place at the Sheraton Suites Fairplex in Pomona, where a reception was also held to honor the 1972 La Verne baseball team, which Hines coached to the NAIA championship.

“He loves baseball,” Rusty Evans, ULV spokesman, said.
“I went to his house one time, and it was all baseball.”

Hines received the 2007 Alumnus of the Year award for Service to Profession along with three other awards that evening.

The award recognizes significant contributions toward the University from an alumnus to his or her profession.

As a player, Hines played shortstop for Mesa Community College and Cypress College.

He was later drafted by the Detroit Tigers in the fourth round of the 1976 Major League baseball draft.

Following his playing days, Hines took the post as manager of the ULV baseball team.

Hines, a 1958 graduate, has a long history of coaching teams to their maximum potential.

Hines left ULV to take the reins of the Arizona State Sun Devils in 1981, coaching them to a 55-13 season and a College World Series title, setting school records in RBI and batting average.

After two seasons at Arizona State, Hines began a career in the Major Leagues, in which he coached for the Seattle Mariners, California Angels, Los Angeles Dodgers and Houston Astros.

While he was on the Dodgers staff, the team went on to win 90 games in a season three times.

He was also part of the Dodgers’ 1988 world championship team as a hitting instructor and first base coach.

One of Hines’ former players, Nick Leyva, managed the Philadelphia Phillies from 1989 -1991 and is currently on the Milwaukee Brewers coaching staff.

All of which adds onto Hines’ impressive résume.

In 1994 the University further commemorated Hines’ work on the field by inducting him into the Athletic Hall of Fame.

“He is a great success,” said athletic director Christopher Ragsdale. “And he is also a gentleman.”

After opening remarks made by Charles Bentley, public relations director, and Todd Snow, president of the University of La Verne Alumni Governing Board; a three-course meal; and a soccer team tribute, the jovial and friendly Hines was behind the podium to accept his well-earned award.

Although it is clear that the teams he coached were never far from his mind.

“What I am most proud of,” the coach said as he wiped his eyes every now and then. “Is that my players led successful lives outside of baseball. You have all honored a very special group this evening.”

Dan Sayles can be reached at dsayles@ulv.edu.