By Catherine Campos, Galo Pesantes on September 21, 2007 in Soccer, Sports 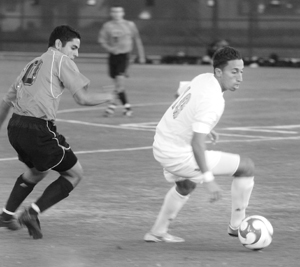 In the season opener against Occidental Sept. 12, University of La Verne midfielder Kiko Escobedo regained possession of the ball against Occidental’s defender Alfie Berumen. After the long bout between the two Southern California Athletic Intercollegiate Conference teams, the Leopards clawed the Tigers winning 3-2. ULV’s current record is 2-4-1 including 2-1 in SCIAC. / photo by Catherine Campos

The Bulldogs entered the game ranked No. 22 in the nation and one of the top teams in the Southern California Intercollegiate Athletic Confer­ence, only to fall to the Leopards, 2-1.

While the Leopards were still savoring their last minute win over the Tigers at home, they prepared for their second conference game of the season.

Redlands got on the board early as junior midfielder Bryan Fakkema scored in the ninth minute for the Bulldogs and held the Leopards offensive tactics down all the way into the second half.

The Leopards finally broke through in the second half when freshman Wesley Lucas scored his fourth goal of the season with less than seven minutes left in regulation to tie the game, 1-1.

“It felt good to get on the score sheet again,” Lucas said. “But I couldn’t have done it without the teammates helping me out.”

It was Valle’s cross that helped freshman forward Hector Lepe score the game winning goal in the 89th minute of play for the Leopards.

It was the Leopards’ second win at home in dramatic fashion against another SCIAC opponent.

“It was pretty awesome,” said freshman goalkeeper Nick Pignotti after the win. After beating (Occidental), we were pretty fired up but this was just icing on the cake.”

After a slow start, the Leopards look to be on the right track for the rest of the season.

“We have excitement back under our belt,” said junior midfielder Joseph Valencia. “I think we can go No. 1 in conference if we can continue working hard as a team.”

However the Leopards lost, 4-1, to Claremont-Mudd-Scripps at Ben Hines Field Wednesday. CMS scored three goals in the first half to the Leopards’ lone goal by senior midfielder Kiko Escebedo.

The Leos will try to bounce back tomorrow at Caltech with game time at 11 a.m.