By Catherine Campos, Jonathan Smith on December 7, 2007 in Comedy, News 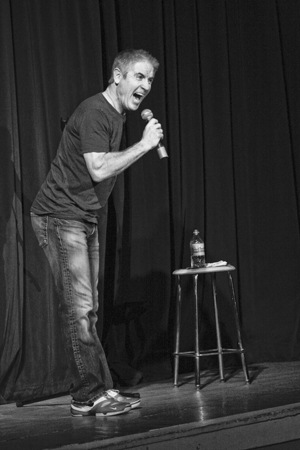 Comedian and actor Carlos Alazraqui delivered his stand-up routine for the University of La Verne’s students and guests in Founders Auditorium on Nov. 29. Alazraqui plays officer James Garcia on Comedy Central’s “Reno 911!,” and delivers many voices that can be heard on children’s television. The Campus Activities Board sponsored event was to include fellow “Reno 911!” cast member Cedric Yarbrough but Yarbrough was feeling ill. The duo plans to return to ULV in February. / photo by Catherine Campos

It might seem impossible to get all of Hollywood on the same stage – in Founders Auditorium – let alone the same building.

But that was what happened as comedian Carlos Alazraqui, from the hit Comedy Central series “Reno 911!” performed on campus on Nov. 29. The Campus Activities Board sponsored the event.

Alazraqui’s comedy blended his shows character as well as famous impersonations that sent the audience down memory lane.

“I thought it was cool. It was like a time capsule. Reminded me of Michael J. Fox in ‘Back to the Future’,” Alazraqui said, about the stage after the performance. “It was a very vocal crowd.”

The night began in an unusual way as Deputy James Garcia came out on the stage, courtesy of Alazraqui. Deputy Garcia is the character Alazraqui portrays on “Reno 911!”

Garcia explained that he was gracious to be there and was performing as campus safety for the night.

After Garcia’s bit, assistant dean of student affairs Chip West strutted out on the stage to a roar of applause, wearing an officer outfit similar to characters on the show.

Most audience members connected with Alazraqui many impersonation voices he performed.

His impersonations ranged from public figures like Simon Cowell to Dr. Phil, as well as ones he made popular himself like Rocko from the hit Nickelodeon show “Rocko’s Modern Life.”

“I was laughing at his impressions,” CAB chairwoman Michelle Ajemian said. “And I’m looking forward for him to come back in February.”

Some audience members connected with Alazraqui’s Spanish roots, especially when he talked about playing Scrabble with his mother, who is Argentinean.

“I’m Latina too so it’s funny I can laugh at it too,” Lorraine Rodriguez, a sophomore movement and sports science major said.

Other audience members connected with numerous facets of Alazraqui’s comedy.

The audience went into a laughing frenzy when Alazraqui commented on names of hurricanes and the lives of models. Alazraqui also commented on several issues that pertained to college students, like traffic.

Yarbrough, who plays Deputy S. Jones on the show, was scheduled to appear but canceled due to sickness.

“I thought it was good,” Roy Merker said, a movement and sports science major. “I wish that ‘Jonesy’ (Yarbrough) could have came.”

“I loved it. I actually don’t watch the show but I loved it,” Rodriguez said.

After the show, Alazraqui graciously signed autographs and took pictures with students.

“It was awesome. It was hilarious,” Danielle Torkelson, a freshman political science major, said after the hour long show. “My face hurt so bad.”

“He was really like down to earth,” Wood said.

Torkelson and Wood received autographs and also took a picture with Alazraqui.

The event featured a packed house of students, which forced some people to sit up in the balcony.

“It was approximately 293 give or take a few,” CAB’s advisor Barbara Mulligan said.

Alazraqui started comedy in 1984 back at Sacramento State, where he did his first show at Harry’s Bar and Grill. Alazraqui said he really made a push for comedy in 1987 when he moved to San Francisco.

“In college, I did some interactive mime,” Alazraqui said.

In 1992, Alazraqui received a bid to voice the character Rocko for “Rocko’s Modern Life.”

“That’s what started it all,” Alazraqui said about the show.

Alazraqui is the voice of some recognizable figures like the Chihuahua dog from the Taco Bell commercials in the late 1990s. He is also the voice of Mr. Weed off the hit animated series “Family Guy,” Mr. Crocker on Nickelodeon’s “Fairly Odd Parents” and ‘The General’ off The General commercials.

With a resume filled with famous voices, Alazraqui said that performing voice over work and impersonations are sometimes difficult.

Alazraqui performed the voice of Billy Crystal’s Mike for several Disney projects including the Disney California Adventure attraction, Monster’s Inc. Mike and Sully to the Rescue.

“There are some that are out of your (voice) range,” Alazraqui said. “It’s whatever your wind instrument is.”

Now living in Los Angeles, Alazraqui is proud of his many opportunities but still feels for home.

“You can’t beat a city like San Francisco,” Alazraqui said.

Because of the enthusiasm of the audience, Alazraqui agreed to come back for a second visit next year. Next time he might bring some guest.

Whether or not those guests will be one in body is all up to him.