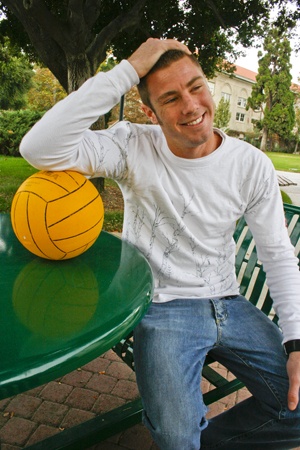 Andrew McPartland’s four-year water polo career at La Verne ended with more than 150 goals. The senior utility player is leaving ULV with a degree in political science with an emphasis in pre-law. He hopes to continue to play with a master’s team in his hometown of San Diego. / photo by Catherine Campos

For all but the die-hard followers, water polo has never been the popular sport for children to play.

But when Andrew McPartland was tired of playing AYSO soccer, he knew he had the passion to be in the water.

“It’s my element and I feel comfortable in the water,” McPartland said. “I like the intensity and fast passed environment.”

As a result of his desire to be in the water, he joined the club water polo team in the seventh grade in his hometown of San Diego.

McPartland had the determination, passion and aggression that made his achievements look effortless.

He has started the last four years for the La Verne water polo team and has earned First and Second Team All-Southern California Inter­col­legi­ate Ath­letic Conference honors throughout his four years.

Despite La Verne finishing a disappointing 6-21 season overall, McPartland said that this has been the best four years of his life.

“I ultimately could have played better at times,” McPartland said. “But I let my emotions get the best of me.”

McPartland finds joy in playing water polo because it is a sport that is team oriented and talent filled.

However McPartland was able to come in and contribute from day one to the La Verne team.

“He ranks among the top in conference because his ability to shoot, swim fast, play defense, and roll into set when he has to,” said head coach Alex La. “We can depend on him for a lot of things.”

As a 6-foot-3-inch, 185 pound utility, McPartland exudes pride when in the water.

Some of that pride can be seen by just looking at his tattoo on the inside of his left arm, which symbolizes his Irish blood. The tattoo is a four-leaf clover that reads, “The Luck of the Irish.”

“I play to win,” McPartland said. “I don’t regret anything.”

Andrew was also among one of the five seniors that will be surly missed next year.

McPartland and Shelton have continually ranked among the nation best in goals scored over the past three years.

However not all of McPartland’s accolades were on the offensive side of the pool, as he often faced off with the oppositions’ best.

While he’s definitely the shark in the water; he’s quite the opposite when you see him walking around campus.

“We put a lot of energy into this game,” McPartland said. “So after a hard practice or game all you want to do is relax.”

McPartland is that kind of guy that enjoys having fun when he’s not at school.

He likes to go surfing, going out with his friends, and watching movies in his spare time.

“He means well, but this season his passion [which isn’t a bad thing] sometimes caused him to lose focus.”

In January, McPartland is graduating with a degree in political science with an emphasis in pre-law.

After graduation he is moving back to San Diego to work, save some money and take a year off from school.

“I want to go surfing, and read some books that I want to read instead of have to,” McPartland said.

He recently bought an XBox 360 and 50-inch plasma TV as a graduation gift to himself.

“I think after 17 years of school, everybody deserves to treat themselves,” McPartland said.

During this time he will be studying for the LSAT with the goal of entering the University of San Diego Law School in fall 2009.

As for water polo, he does not see this as the end.

“I would like to play on a master’s team, or coach a high school team,” McPartland said. “I don’t want to be away from this sport.”