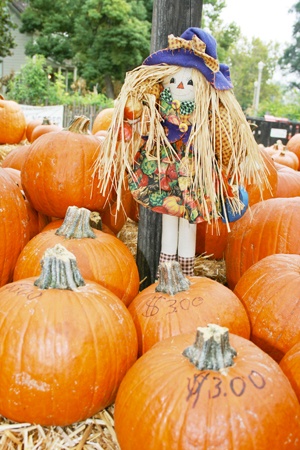 On Oct. 13, Heritage Park in La Verne opened its gates for its annual Harvest Pumpkin Patch. Besides the chance to pick up a pumpkin for Halloween festivities, the city sponsored hayrides, a baby chicken market and an opportunity to pet baby goats and a pig. Prices for pumpkins vary throughout the patch. The park is open to the public at 4 p.m. on weekdays. During the day, local elementary schools come for tours. The park will also host a vintage car show on Saturday. / photo by Catherine Campos

The sound of chicks chirping filled the air as a tractor filled with hay and happy families circled the one and a half-acre ranch of the Heritage Park farm in La Verne last weekend.

The traditional Heritage Harvest Pumpkin Patch opened on Saturday as several La Verne locals came to get the first pick of pumpkins for the season.

“It’s a nice place to bring your family,” Christa Crowell said. “We are going to pick out a pumpkin, carve it and cook the seeds.”

Michael Kress, freshman chemistry major at the University of La Verne, was working at the pumpkin patch last weekend helping families pick out pumpkins and selling tickets for the hayride.

“We’ve got a lot of heritage events,” Kress said.

The ranch is dedicated to preserving the history of La Verne and provides several activities throughout the year to preserve the heritage of the community including concerts in the park, history tours, orange sales and of course a pumpkin patch.

“Others (pumpkin patches) are all about profit, this one is to benefit the city,” Kress said.

Pumpkins filled the front of the Weber House, one of the oldest remaining houses in La Verne as local families searched for the perfect pumpkin for this Halloween.

The ranch also had several animals to look at including goats, a pig, chickens and even chicks for sale.

“We wanted to see the chicks,” Crowell said. “We might even surprise my friend with one.”

The chicks seemed to be the highlight for some this weekend, while others were not quite ready to take one home.

“We don’t want a chick, they turn into chickens,” Briana Lorge said as her son huddled over the chicken coop.

If you have never had an opportunity to visit this particular pumpkin patch, this is the year to do so.

It is located off of Via De Mansion in northern La Verne and is the perfect place to pick out a pumpkin, take some pictures, go on an old-fashioned hayride and enjoy some of La Verne’s rich history.

They receive several pumpkin shipments throughout the season but if you want to bring home a baby chick, you might want to hurry because they are going fast.