By Courtney Droke, Jamie Ondatje on March 14, 2008 in Sports, Tennis 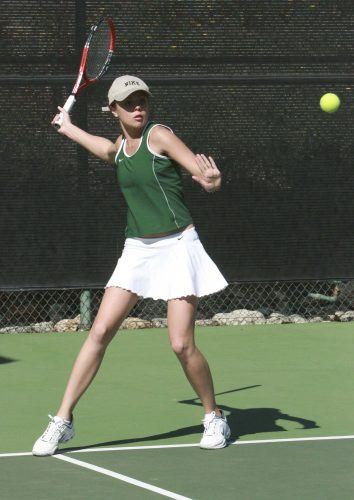 Returning the serve to the Sewanee Tigers, La Verne’s Jennifer Schiller played both a singles and a doubles match March 10 at the Claremont Tennis Club. Though Schiller managed a two-set victory with scores of 7-6 and 6-4, it was not enough to beat the Tigers who toppled the Leopards, 8-1. ULV is scheduled to play Puget Sound at Bonita High School March 22. / photo by Courtney Droke

After a long, difficult match, the La Verne women’s tennis team was defeated Monday by Sewanee, a team from Tennessee, with a final score of 8-1, giving the Leopards an overall record of 3-8.

Because Sewanee, also known as the University of the South, was playing other teams in their trip to California, they were late to the match against ULV, delaying the start by about an hour.

The extra wait before game time seemed to throw the Leopards off their game.

“We were kind of frustrated because the other team was late,” sophomore Jennifer Baca said. “We weren’t really in the game mentally.”

Both teams were somewhat worn out going into the match, with La Verne having a match two days earlier and Sewanee playing in a match just before traveling to the Claremont Club.

“I think we went into it thinking we were going to win because they had just played another match,” sophomore Ashley Roy said.
“We thought we had an advantage over them.”

The Tigers turned out to be stronger than expected and bounced back quickly to play a long match against ULV.

Sewanee seized victories in all three doubles matches and five out of six singles matches.

Doubles No. 3 was also a tough match, ending in an 8-1 loss for ULV’s Baca and sophomore Claudia Chavez, who played Sewanee’s Lindsay Wilburn and Lauren Robbins.

“We never gave up,” Roy said. “Even though we were down some sets, we hung in there and we gave it our all.”

Despite this positive attitude, the singles matches did not get any easier.

Schiller seized the only victory of the day at singles No. 4 after two back-and-forth sets against Sewanee’s Ashley Macon, the first set ending at 7-6 and the second at 6-4.

At singles No. 1 Harden put up a tough fight for Wilburn, winning her first set 6-1, but lost her second and third sets 6-0 and 10-4, respectively.

Singles No. 3 also went into a tiebreaker, as Rodriguez won the first set 6-4 and Sewanee’s Abby Rudd barely won the second set 7-6.

Baca fell to Robbins in singles No. 5 with scores of 6-1 and 6-2 in the first and second sets.

Chavez lost her first and second sets 6-0 and 6-1 against Sewanee’s Miriam Pale at singles No. 6.

Singles No. 2 did not complete a full match as Wiles became ill in the first set against Derry Robertson, which ended with a score of 5-4.

“We had a few really close matches,” Harden said. “We tried really hard; I think that’s always a good thing.”

The challenge the team faced Monday against Sewanee will only better prepare them for their match today against Biola.

“University of the South was really good; they were really consistent,” Roy said. “I think that was a good practice match for Friday.”

The team faced the Eagles earlier in the season and lost by only one game.

However, the Leopards were only playing with four out their seven team members against Biola’s full team.

“I’m really confident about our match against Biola,” Harden said. “We did really well playing against them last time, and this time we’ll have a full team.”

The Leopards host the Eagles at The Claremont Club today at 3 p.m. and will face Puget Sound on March 22 at Bonita High School at 10 a.m.