By Jaclyn Dino, Jamie Ondatje on April 18, 2008 in Softball, Sports 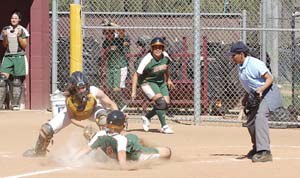 Advancing to third on a wild pitch put La Verne’s Melissa Carlson in scoring position on Saturday against Claremont Mudd-Scripps. Trisha McCormick allowed Carlson to score on an RBI. Carlson was safe at home, but the Leopards lost 4-5 in game two. CMS swept the Leopards in the two-game series. La Verne will host Cal State East Bay today. / photo by Jaclyn Dino

Softball faced a tough lineup last weekend with a split against Redlands, the No. 1 team in the Southern California Intercolleg­iate Athletic Conference and two losses against Claremont-Mudd-Scripps, currently ranked number two in SCIAC. The stretch of the games resulted in giving La Verne a record of 8-10 in SCIAC and an overall record of 16-16.

“In the first game I feel like we did not come out as strong, but our defense was amazing,” junior Melissa Carlson said.

In Saturday’s first game, junior third baseman Lynsey Padilla scored the only run for La Verne due to an error by Claremont.

In the second game, Claremont was led by Jessica Vaughn and Emily Coleman, each with two hits and an RBI, as well as Yale with an RBI triple that led to the win.

La Verne was led by Ashley Paul who went 4-4, followed by Jodi Lindsay who had three hits, including an RBI double. 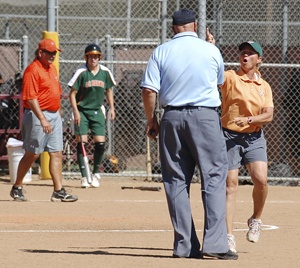 During Saturday’s game, head coach Julie Smith was in an uproar in the sixth inning after the umpire called the Leopards out at first to make it the third out. Smith left the game at the end of the sixth inning. ULV went on to lose to CMS in both games of the series. / photo by Jaclyn Dino

Senior Trisha Mc­Cormick had a hit and two RBI’s, and Padilla had an RBI single in the 5-4 loss.

In Friday’s games against Redlands, ULV saw one win in the second game, but lost in a tough first game.

Redlands’ defense was strong, resulting in a low scoring, 2-1 game.

By the end of the third inning, each team had a hit, but neither had scored a run.

In the fifth inning, Kayla Peterson had an RBI hit to score Lizette Casillas and put Redlands on the board with the first run of the game.

La Verne caught up in the sixth inning, when Carlson hit a double to center field and scored on Lindsay’s single up the middle.

The score stayed tied through the seventh inning, with Redlands unable to get a hit off pitcher Delaney Baylor-Dick and La Verne getting two hits, but no runs.

“It is hard enough to get a runner on with less than two outs, and when we did, we didn’t capitalize on it,” McCormick said.

In the top of the eighth, Red­lands’ Devery Mitchell was hit by a pitch, and Nicky Neumann and Peterson bunted for singles.

Melanie Hamlin was also hit by a pitch, scoring Mitchell with the eventual winning run.

In the second game, the Leopards had more offensive action and maintained a strong defense to pull out a hard-earned 4-3 win against the Bulldogs.

“Overall, our offense came through, our defense did a good job, and our pitchers put us in a position to win,” head coach Julie Smith said.

In the second and third innings, both teams had runners in scoring position but neither team could take advantage.

ULV’s Mandy Brenner tripled to right field in the second. Redlands’ Neumann doubled to left center in the third.

“It became a pitch-by-pitch battle,” Smith said. “Our pitchers did a great job.”

The Bulldogs did not catch up until the fifth inning, when Mitchell scored on a wild pitch , tying the score at 1-1.

In the bottom of the fifth, the Leopards fought back as Carlson, who ended up 3-3, tripled to left field and then scored on Paul’s sacrifice fly.

After Redlands retired Lindsay with the first out of the inning, Padilla stepped to the plate and hit a solo home run, giving the Leopards a 3-1 lead.

In the sixth, Redlands came back with two runs when Mitchell was walked by pitcher Karina Ortiz, scoring Dory Baga, and Sam Ingram scored on an unearned run, tying up the score, 3-3.

La Verne answered back in the bottom of the inning with two consecutive singles by McCormick and Jessica Ortega. Carlson was walked by Olivia Ellis and Paul singled to center, scoring McCormick and breaking the tie.

In the seventh inning, Neumann got a single but was thrown out trying to steal second. La Verne got the final two outs to secure the 4-3 win.