By Courtney Droke, Jonathan Smith on November 9, 2007 in Football, Sports 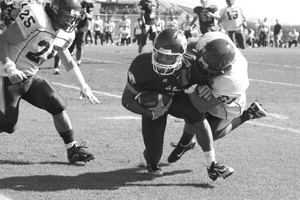 On their way to win the first game of the season, University of La Verne’s wide receiver Grady Thomas maintained control of the ball against Claremont-Mudd-Scripps’ David Spiller and Aaron Campbell during the second quarter at Ortmayer Stadium. La Verne’s offense gained a total of 446 yards Saturday afternoon bringing them to a 31-7 victory over the Stags and a SCIAC record of 1-5. The Leopards are scheduled to play their last game against Chapman Saturday at home. / photo by Courtney Droke

When the La Verne football team wins, it wins big.

The Leopards on Saturday were seeking their first win of the season, and they got it as they pounded Claremont-Mudd-Scripps, 31-7.

The Leopards got the ball early with an interception on the opening CMS drive by defensive back Blair Chavez to give the Leopards an opportunity to score.

The drive ended in a field goal by Taylor Hart to lead 3-0.

The defense came up big again as junior defensive back Grant Woods force a fumbled on CMS running back D.J. Lillard.

The fumble gave the Leopards a chance to increase the score and they did with a 64-yard run by senior running back Chris Handy.

The Stags were unable to construct any good drives throughout the game, as they fumbled in their next drive.

The fumble set up another Leopard score, this time through the air as senior quarterback Troy Doolittle threw a strike to Handy for an 8-yard touchdown.

The Stags brought the score within 10 points when junior quarterback Ryan Larsen connected with sophomore receiver Nick Marineau for a 21-yard touchdown pass at the end of the third quarter.

But the Stags were not able to contain the Leopards offense in the fourth quarter as Doolittle connected with junior receiver Charles Lacy on a 20-yard touchdown pass that put the lead to 24-7.

Later Handy scored another touchdown midway through the fourth quarter on a 30-yard run, shaking four CMS defenders to the end zone.

The touchdown score put the game out of reach for the Stags, as the Leopards recorded their fourth consecutive win against CMS.

Handy was the leader and workhorse for the offense, rushing for a game high 161 yards on 14 carries.

Handy ended the game with three touchdowns, two rushing and one receiving.

Doolittle completed 28 of 43 passes for 215 yards, with two touchdowns and one interception.

Lacy was also a big factor for the offense, catching six passes for 73 yards and one touchdown. Junior receivers Grady Thomas and John Ausman combined for nine receptions and 56 receiving yards.

“It was a complete team effort. We finally played four quarters as a team,” Lacy said.

CMS did have a bright spot on the field in Lillard, who had 16 carries for 107 yards rushing.

But the Leopards defense forced four fumbles, recovering three, and caught three interceptions for a total of six turnovers during the game.

ULV also recorded four sacks for a loss of 22 yards.

“The defense came out strong,” said sophomore defensive back Ryan Figgs. “We got turnovers and gave our offense good position.”

“Our focus was to play for our teammates. Go out there and play hard, play physical and play four quarters and win,” Lacy said.

With their first victory out of the way, the Leopards have more goals on the horizon.

The Leopards play their last game of the season on Saturday against Chapman at home.

The Leopards hope to finish the season strong with a win, but also hope to bring the same energy into next season.

“I’m excited about the guys that are coming back,” Ankeny said.

“They all will be fired up when the off-season comes.”

At the end of the third quarter, La Verne defensive tackle Roger Toledo and defensive end Greg DeLong sacked Claremont-Mudd-Scripps quarterback Ryan Larsen at Ortmayer Stadium Saturday. The Leopards ended the game in a 31-7 victory over the CMS Stags, bringing them to their first win of the season.

Women’s team set to tip off season
Rest up, it’s better for your health