By Courtney Droke, Richard Lugo on March 7, 2008 in Baseball, Sports 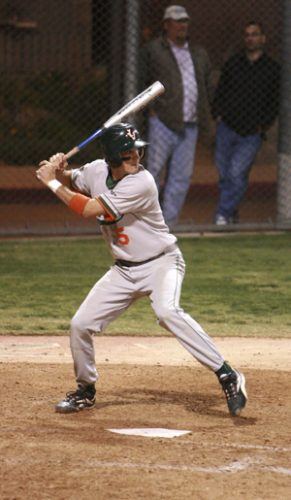 In the fifth inning, University of La Verne’s shortstop Jack Mehl drew a walk against Azusa Pacific pitcher Zach Pettikas and later advanced to second on Feb. 26. The Leopards played a tough game but fell short with a final score of 5-2, bringing the Leopards to a current 6-4-1 record. La Verne is scheduled to play a doubleheader Saturday at Ben Hines Field against Redlands. / photo by Courtney Droke

Riding high off a string of wins, the La Verne baseball team looked to continue its solid play against a legitimate opponent in the NAIA’s No. 2 ranked team, the Azusa Pacific Tigers, on Tuesday.

The Leopards put up a good fight yet were unable to match the offensive productivity that has carried them so far this season. APU came into the game boasting an impressive 13-1 record and showed why they are being considered as one of the best teams in school history, hitting three lead off home runs and beating ULV, 5-2.

“We had opportunities to win the game in more than one situation; we beat ourselves,” Hattabaugh said.

Hattabaugh, who batted 3-for-4, got the Leopards off to a fast start in the first inning with his single to center field driving in the first run of the game.

ULV would load the bases yet APU senior starting pitcher Andrew Shive was able to strike out sophomore center fielder Demetri Mondotte to get out of the inning.

ULV’s lead would not last long as the Cougars answered back in the bottom half of the inning with a lead off home run from senior shortstop Matt Venegas to tie the game 1-1.

The solo home run marked the third time this season that Venegas has gone deep to open up a game.

APU sophomore Brice Cutspec carried on the trend by hitting a homer over the left field fence to lead off the second inning.

The Cougars scored another run in the third inning to take a 3-1 lead.

ULV’s junior pitcher Rich Johnson, who started the game, struggled early on allowing two runs before being replaced in the fourth inning by junior Jesse Sweet.

The Leopards’ offense was not totally anemic; however, they failed to execute the little things that have been helping them win ball games all season. ULV stranded 11 base runners in the game.

“We have to score and make better pitches,” Sweet said. “We stranded too many runners.”

The Leopards looked like they were ready to make a dent in the Cougars’ 4-1 lead in the bottom of the eighth inning when they loaded the bases with two outs.

Sophomore infielder Jason Munoz, who was pinch hitting for senior left fielder Brandon Mikkelson, drew a walk despite being down 0-2 in the count to drive in a run for the Leopards cutting APU’s lead 4-2.

Senior second baseman Trevor Boucher batted next and reached on a fielder’s choice and Hattabaugh was thrown out at home.

This was the second time in the game that the Cougars were able to get out of an inning while the Leopards had the bases loaded.

Azusa Pacific’s senior second baseman Galen Komo followed form leading off the bottom of the eighth inning with a solo home run to give his team a 5-2 lead.

La Verne was unable to muster any offense in the ninth inning and was defeated for the fourth time this season.

“We have to prepare better,” head coach Scott Winterburn said. “We have to go out and approach each series with respect and preparation.”

“To be a championship ball team we need to take advantage of opportunities,” Sweet said. “We had a chance to win, and against Redlands and other conference teams we’re going to need to put games out of reach when we have the chance.”

The Leopards face conference rival Redlands today at 2:30 p.m. in Redlands and will host the Bulldogs in a doubleheader on Saturday at 11 a.m.