By Cindy Harder, Kevin Garrity on December 11, 2009 in Basketball

Amanda Copas leads the team with 14 points in losing effort. 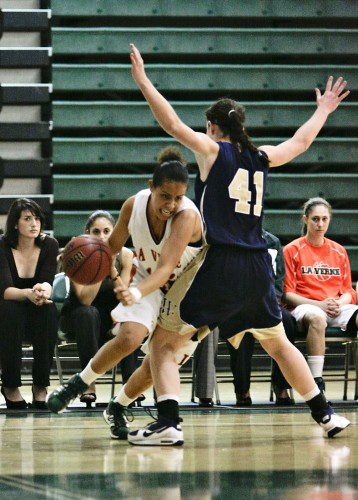 La Verne guard Mayra Duenas drives past Whitman forward Michelle Krall in the second half Saturday on the Frantz Athletic Court. The Missionaries defeated the Leopards, 66-57. ULV’s next game is Friday against UC Santa Cruz. / photo by Cindy Harder

La Verne’s first home loss of the season came at the hands of Whitman after a late scoring surge that broke open a game that was close throughout.

Both teams jockeyed to hold on to a lead in Saturday night’s contest, but with five minutes left the Missonaries went a dominant run to end the game, 66-57.

“We didn’t do a great job of containing them so we gave up some easy shots instead of forcing them to shoot from the outside,” said interim head coach Lindsey Shiomi. “It starts with containing from the outside to prevent them from penetrating into the middle. But we did do a good job of keeping them off the offensive boards.”

“They executed every single possession,” said junior Mayra Duenas. “And they just didn’t want to lose the battle.”

The Leopards were led by Amanda Copas with 14 points, but poor second half shooting from the field by La Verne, 33 percent, left the door open for Whitman to capitalize.

Whitman’s interior outsized La Verne in the middle which led to easy baskets in the lane.
If it wasn’t for stellar free throw shooting by La Verne, 18-19, the lead would have been almost insurmountable.

“In the second half, our defense wasn’t what it should have been,” said sophomore Clarissa Holz. “Our intensity throughout the game was good and we can use that moving forward.”

Duenas chipped in with eight points, nine rebounds, four assists and four steals to go along with Holz 10 points.

However, La Verne’s sloppy play, 14 turnovers, left them self in a self-afflicted hole that they could not overcome.

“We played really hard the entire game and we usually do and we executed well during stretches of the game,” Shiomi said.

The Leopards have been able to start off the 2009-10 season hot, winning four out of its first six games, and hope to be a tough contender once conference play begins.

“Every team is going to come after us in conference,” said Duenas. “So we know it’s not going to be easy.”

“Conference is tough this year, one of the toughest years that I have seen in the last four or five years,” Shiomi said. “Every game we will have to play to our potential and staying consistent while doing that is going to be key for us.”

Our expectation is to play in the conference championship this year, Holz said.

The Leopards will be back in action tonight when they play a home contest against UC Santa Cruz at 5 p.m. at Frantz Athletic Court.