By Cindy Harder, Kevin Garrity on November 6, 2009 in Volleyball 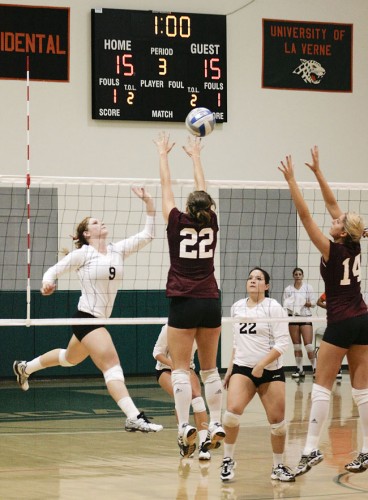 La Verne setter Anna Calmer spikes a point against Redlands outside hitter Jackie Hamilton (No. 22) and middle back Emily Capozzoli (No. 14) with help from setter Yesenia Lopez. The Leopards chained up the Bulldogs, 3-1, Tuesday on the Frantz Athletic Court. The team opens the SCIAC tournament at 5 p.m. Friday against Cal Lutheran at Currier Gymnasium in Redlands. / photo by Cindy Harder

It was an emotional setting on the Frantz Athletic Court Tuesday night, when the volleyball team recognized its seniors before their last home game, which turned out to be a 3-1 La Verne win.

Karli Fowlkes, Ashley Morgado, Crista Jones and Yesenia Lopez were all accompanied on the floor with parents, flowers and their last opportunity to play in front of the rowdy student section at La Verne.

“They have been a big part of the history of this program,” said head coach Marlon Sano. “Every day they work really hard no matter what side of the net they were on. I know they are going to be really successful in their lives.”

“The seniors were the heart of our team,” said junior Chelsea Sleight. “All of them were leaders on and off the court and I am going to miss them greatly.”

The Leopards clinched a spot in the Southern California Intercollegiate Athletic Confer­ence tournament on Friday with a win against Claremont-Mudd-Scripps.

But its win against SCIAC champions Redlands could help its regional ranking.

ULV was able to channel the pre-game emotion into attacking the Bulldogs early, opening an early 5-1 lead behind four kills by Jones.

The Bulldogs earned its only set win in the second, 25-22, when they took the lead 6-5 and never surrendered it.

In a back and forth set three, the Bulldogs and Leopards exchanged points for a majority of the match until ULV opened up the lead 24-20 and ultimately won, 25-22.

The hard fought loss stayed with the Bulldogs early in the fourth set and La Verne capitalized on it, stretching its lead to 20-13.

However, Redlands had one last push, winning seven of eight points and pulling to within two points late in the set.

The Leopards front line staved off the Bulldogs though, winning four out of the last six points and protected its home court with a 25-21 win and 3 sets to 1 victory.

Jones, who became the all-time kill leader in Leopard history during the rally scoring era on Oct. 30 with 1,305, added 18 kills in the game.

“It’s a great honor, but at the same time it’s just an award. The most important thing was I was able to be a part of this team. Achieving it with these girls means a lot,” Jones said.

Sleight added 23 digs to the Leopard cause.

“More important than the win, we were able to build momentum,” Sano said.

“We have stayed pretty steady after a bunch of injuries. They have been really resilient,” he added.

“I thought we played really well tonight, but we still need to cut down on a few minor errors,” Jones said.

The Leopards earned the No. 3 seed in the SCIAC tournament and will play No. 2 Cal Lutheran tonight at 5 p.m. at Currier Gymnasium in Redlands.

“Our expectations are pretty high, we are playing well and the kids are practicing hard,” Sano said.

“We have been able to play at a high level going into to the tournament,” he added.