By Cindy Harder, Kevin Garrity on October 30, 2009 in Volleyball 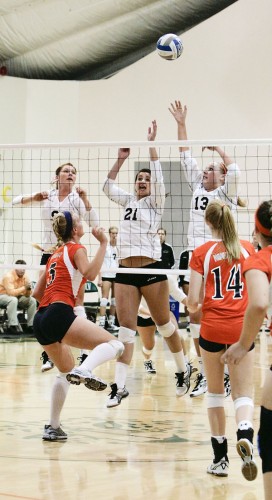 La Verne’s setter Anna Calmer, middle back Ashley Morgado, and outside hitter Randi Toomay repelled Pomona-Pitzer’s outside hitter Carly Hite’s (No. 5) attempt to score with backing from middle back Rachel Bollens (No. 14) in a Leopard victory. The next game will be at 7:30 p.m. Friday at Claremont Mudd-Scripps. / photo by Cindy Harder

The Leopards pulled one game closer to a conference tournament bid Tuesday night, with a dominant win over conference foe Pomona-Pitzer, four sets to one.

La Verne was in need of a win after dropping a match to Cal Lutheran Friday, which snapped the Leopards’ six-game win streak.

The Leopards and Sagehens both recognized Breast Cancer Aware­ness Month before the match as they warmed up in pink shirts, which was demonstrated by all NCAA schools.

“It’s nice to be able to be out here representing a cause,” senior Crista Jones said.

“Especially knowing that the entire SCIAC will wear pink in order to show our support,” she added.

Freshman Randi Toomay was also instrumental in the match with 14 kills and 11 digs.

“We have gone through so much as a team with injuries and line-up changes, but the team has been really resilient and able to do great things,” said head coach Marlon Sano.

At one point the Leopards were up 20-13 only to see there lead dwindle down to 24-23, however La Verne was able to put the first set away with a set point rally.

The Leopards secured the second set as well, but this time they needed extra points to do so, 26-24.

“When we play fast we are very good,” Sano said.

“We need to understand momentum, and how we can take it into the tournament,” he added.

The Sagehens only set victory came in the third, but the Leopards forced them to execute successfully in the latter points to achieve it.

The Leopards were down most of the set and pulled within one point, 21-20, until the Sagehens won three of the next six points to cut La Verne’s overall lead to 2-1.

The fourth set proved to be all Leopards, as they secured the set and the match win with a commanding 25-16 set win.

“We know how good we can be when we are on as a team,” Jones said.

The Leopards need to win one of its last two games in order to qualify for the Southern California Intercollegiate Ath­letic Conference Tournament set to start Nov. 6.

Sano said the most important things for his team in the upcoming games is to be steady in all phases of their game and be able to recognize how they need to generate enough energy to force the tempo of the match.

La Verne’s first opportunity will come at 7:30 Friday when it travels to Claremont-Mudd-Scripps.

“We are going to need to have good blocking and defense when we play both C-M-S and Redlands,” she added.

“We are going to need to play up to our level in the rest of our games,” Toomay said.