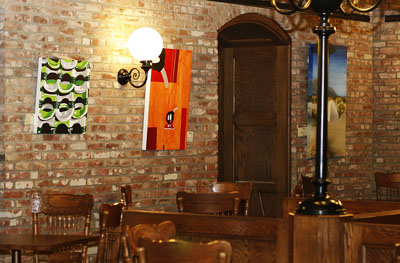 Four University of La Verne students’ artwork are currently on display in the California State Capitol Building in Sacramento. A reception with the artists was held March 25. Amri Covarrubias and Chris Arce’s paintings were displayed in the historic West Dining Rooms along with Leah Heagy’s and Steven Bier’s photographs. The Dining Rooms are attached to the Eureka Room in the west end of the bottom floor of the State Capitol. The Senate President Pro Tem Daryl Steinberg, and his staff sponsored the show, along with the Association of Independent California Colleges and Universities. / photo by Steven Bier

Several Art students from the University of La Verne found their work on display at the California State Capitol last month as part of the Association of Independent California Colleges and Universities fourth annual Student Art Show.

The AICCU, a collection of more than 77 private colleges and universities within California, invites students from schools with fine arts departments to submit their work for display at their annual shows.

“We consider it an honor to be represented in such a way,” said Ruth Trotter, professor of art. “We hope to do it every year.”

Trotter facilitated the selection of the student’s work, which was taken from the Senior Project Exhibition in December of last year.

This is not the first year the University has been represented in the show. This year marks the third time.

“It’s a great opportunity for our students to build their resume and get exposure,” Trotter said.

Bier’s photo of Mount Rubidoux made its way to display in the Capitol’s West Wing Dining Room, which is the only place that public art can be shown because of the State Capitol’s designation as a historical building.

Trotter asked Bier, who traveled to Sacramento for the opening reception, if he would like to submit his art to the show.

“It was weird being there by myself, the opening wasn’t that big, but it was exciting seeing our work up there,” Bier said.

Robert Oakes, vice president of external relations and research for the AICCU, said he saw it as a wonderful way to show private schools make contributions too.

The West Wing Dining Room is a prime location to display the art because all senators and guests in the Capitol pass through the dining room regularly, Oakes said.

The West Wing Dining Room is not the only area of display in the Capitol.

Certain representatives have asked students from their represented districts for art to hang in their offices.

“This is a great way to show commitment to our schools,” Oakes said.

Oakes’ hopes to add a juried section to next years show.

The show runs from April 16th through May 15th

David deBos can be reached at david.debos@laverne.edu.