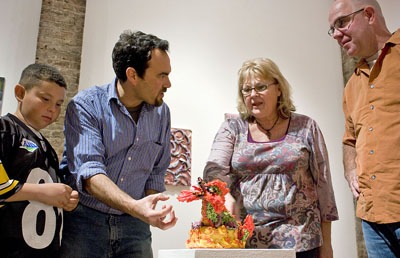 Nathaniel Banks and his uncle Peter Radovich of Pomona discuss the making of a sculpture with the artist, Sharon Suhovy, as John Kneifl listens at “The Red Show” on Saturday. The dA Center for the Arts in Pomona hosted the 20th annual event, which featured art consisting mostly of the color red. Suhovy of Grand Terrace made her artwork, “Red Dragon – Prosperity” of acrylic gel. / photo by Stephanie Arellanes

This weekend’s closing of “The Red Show” at the dA Center for the Arts saw a slightly less populated crowd than on opening night, but spirits were still high.

The show, which has been running for the last 21 years, starts the second Saturday in February for a two week run.

“The idea of red is up to the artist,” Tiffani McEwan, gallery manager for the center, said.

“We didn’t dictate what red was supposed to mean,” McEwan added.

“All it had to have was a shade of red within the piece.”

Pieces ranged from photos to paintings to sculptures to an abstract display of spiraling books on the floor simply titled “The Books I’ve Read.”

The show’s pieces varied significantly, yet they all boasted an underlying theme.

All shades of red, from pinks to burgundy and even somewhat brown tones, were found adorning all of nearly the 100-piece show.

Gallery visitor Whitney Hanlon saw the color red as a broad and open idea that could let artists create nearly anything.

“Red can have such different meanings, ranging from hate to love to passion. It’s very emotional,” Hanlon said.

Artist Ashley Sanchez, who entered her piece “Beauty Plays Death,” a cardboard model of a two-dimensional accordion sold the first night of show.

Even more surprising to Sanchez was that it was the first time she had ever entered something into a show.

Was Sanchez surprised that this happened?

The dA Center, whose name comes from a broken sign outside the gallery’s original location, is a non-profit art organization focusing on community arts.

It celebrates its 25th anniversary this year, making it one of the oldest galleries in the Pomona Arts Colony.

The gallery puts on at least one show a month and holds various classes in which the community can participate.

The dA’s next exhibit will be “Imprints.”

This exhibit will open with a reception at 6 p.m. on March 14.

David deBos can be reached at david.debos@laverne.edu.