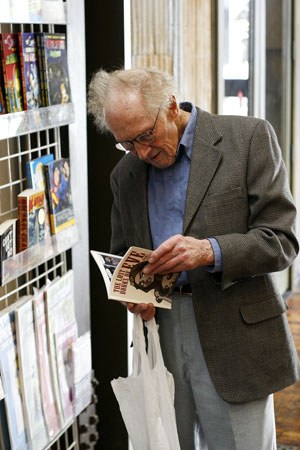 Longtime Claremont resident Warren Lamb attended the Edge of L.A. Comic-Con on Saturday at the Packing House in Claremont. His stepson, Chris Peterson, who manages the event that takes place on the third Saturday of each month, inspired Lamb’s interest in comics. The next Comic-Con is March 21, from 10 a.m. to 6 p.m. / photo by Steven Bier

Comic book enthusiasts and pop culture fans alike made their way to the Edge of L.A. Comic-Con Convention Saturday at the Packing House in Claremont.

The event was the third showing in the series of monthly conventions.

Comic artists, companies and private collectors set up displays for fans to browse through.

This month was the first comic creator showcase in the convention.

Scott Lobdell, co-creator of the “X-Men” spinoff “Genera­tion X,” presented some of his work in a seminar to several dozen fans.

Lobdell presented his own experiences on writing for comics and also signed books.

The convention was put together by Chris Peterson and Eric Von Wodtke, members of Edge of L.A. Productions, after Peterson decided to close down his old comic shop, the Comic Bookie, in the summer of 2008.

Not only have the conventions allowed comic fans to share their interests but they also bring customers to the many businesses located inside the Packing House.

“There are several kid-friendly businesses inside the Packing House so the outcome has been helpful to us both,” Peterson said.

The private collectors set up their comic collections, magazines and action figures for fans to purchase.

Collector Alex Feliciano said he has been collecting comics as far back as he can remember and sells most of his at the cover price, meaning many sell for as little as 25 cents.

“The convention has been great for introducing kids to the world of comic books,” Peterson said. “They see something that’s only 25 cents and they go crazy.”

John Narcomey of the independent comic company High­tower Comics was on hand promoting his own comic series, “Ghostface” and “Spooksville.”

This was the first time High Tower Comics set up at the Packing House convention, and they saw some success selling comic books and t-shirts.

“It’s been a small showing but still successful,” Narcomey said. “The crowd has been very responsive.”

Some comic creators have taken to new forms of distribution with the changes constantly being made in media outlets and new forms of technology always around the corner. Patrick Scullin, creator of the online comic “Super Siblings,” sees the comic book industry taking an interesting direction.

“Its a lot cheaper to distribute online,” Scullin said. “There is going to be a lot of diversity from new creators.”

With the success of the convention increasing from month to month, Peterson and Von Wodtke will be working with several local businesses to keep bringing new interest to the convention.

The next convention will take place March 21.

Christopher Guzman can be reached at christopher.guzman@laverne.edu.