By Madison Steff, Steven Bier on October 24, 2008 in Opinions 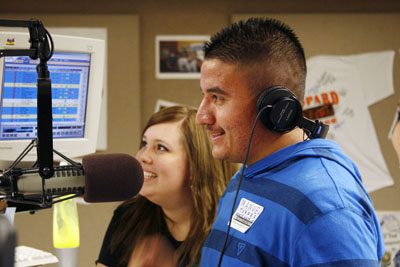 As a young girl eating Fruity Pebbles and watching Jane Pauley on the television, Leila Feinstein discovered her calling to become a television news anchor.

Last Friday as a part of Communications Day, Feinstein visited the University of La Verne to speak to high school and college students about a career in communications.

“I hope [students] will get a better idea if this is a career they want to pursue,” Feinstein said.

Feinstein is co-anchor of the “KTLA Prime-Time News” weekends at 10 p.m. She has received four Los Angeles Press Club Awards, four Golden Mic Awards, a Mark Twain Award and an Emmy Award to date in her broadcasting career.

She earned a master’s degree in broadcast journalism from New York University and a bachelor’s degree in political science and theater/dance from Brown University.

Feinstein, introduced by President Stephen Morgan, spoke to nearly 200 high school, community college and ULV students in the Dailey Theatre for about an hour in front of a KTLA Channel 5 camera and three LVTV-3 cameras.

She explained that a career in broadcasting is a tough one, but if you do not want a typical nine- to-five job behind a desk, it just might be perfect.

She admitted that the road to Los Angeles was far from glamorous, and that she had to travel as far away as Erie, Pa., to work as a general assignment reporter and weekend weather anchor before receiving any job offers in California.

“You have to work hard, and you have to pay your dues,” Feinstein said.

Feinstein explained that one of the perks of being a reporter is that you have a voice and can make a difference in the world.

Feinstein then opened the microphones to audience members for a question and answer session.

“I thought she was extraordinary,” said Amber Southern, a senior visiting from Norte Vista High School in Riverside. “I would rather not eat lunch and listen to her more. She was very inspiring.”

“I came to gain more knowledge of the communications major and what it has to offer,” said Richard Magana, a senior from Los Osos High School in Alta Loma.

Earlier in the day, students were given the opportunity to participate in communications workshops taught by University of La Verne professors. Some of the workshops included resume writing, environmental portrait, web page design, newspaper advertising for beginners, LeoFM radio, sports writing and broadcasting television news.

Nearly 150 students from 25 high schools and three community colleges attended the annual event to explore a career in communications and to be introduced to the University of La Verne as a place to attend school.

Following Feinstein’s presentation, the students were provided with a barbeque lunch in Sneaky Park where they filled out a small survey about their Communications Day experience and were entered in a raffle. The prizes included vintage KULV T-shirts and light up LeoFM cups.

Madison Steff can be reached at madison.steff@laverne.edu.