By Jonathan Smith, Steven Bier on September 12, 2008 in Sports, Volleyball 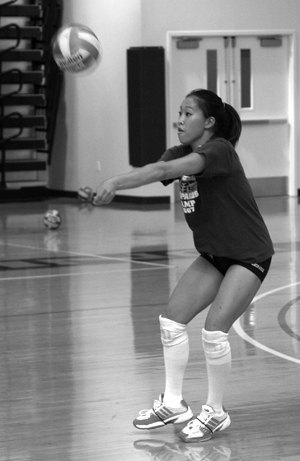 Women’s volleyball player Mika Chan trains for the team’s next game against Chapman. The Leopards are ranked No. 5 in the preseason (American Volleyball Coaches Association) poll. / photo by Steven Bier

Any doubts about the upcoming season for the women’s volleyball team were answered as they defeated three nationally ranked teams in the Puget Sound Premier Invitational Tourna­ment last weekend.

The Leopards also routed Caltech, 3-0, in conference play on Tuesday. They improved their record to 5-0 in the season.

The tournament was sweet revenge for the team, after beating defending regional champions Puget Sound, 3-1.

“It’s always great to start 4-0,” head coach Don Flora said. “It adds more meaning to the success of the season.”

“The first tournament is where you see where you’re at and the first to see the team chemistry,” junior middle blocker Crista Jones said.

The championship game against seventh-ranked Puget Sound was the first since the emotional loss the Leopards suffered in the National Collegiate Athletic Association West Regional Championship last year.

The Leopards saw their season end against the Loggers in the Regional Championship after taking a commanding 2-1 lead to lose, 3-2.

“You can tell from our returners there was a lot of meaning behind it,” Flora said. “We felt like we let a match [the 2007 loss] get away from us and we owed them that.”

“We wanted to prove how hard we work and we wanted to beat them,” Jones said. We knew we were the best team in the gym.”

However, the Leopards saw their first game against the Loggers go sour.

“We started off slow; we got romped,” senior Brianna Gonzales said.

Led by Gonzales and Jones, the Leopards battled their way back to even the score to 1-1 after a commanding come from behind win.

“We knew what we had to do. We couldn’t lower our level of play,” Gonzales said.

In the next two games, the Leopards romped their way to victory taking commanding leads in both games to win, 25-14.

“We got the job done,” Jones said. “We took care of business.”

Jones led the Leopards with 16 kills while Gonzales added 15 kills and nine digs. Sophomore outside hitter Rebecca Villanueva recorded 15 digs for the team.

Earlier in the day, the Leopards defeated another regional rival in Cal State East Bay, which was ranked 12th nationally.

Led by Gonzales, the Leopards tied the fourth game to make it 28-28. But the Leopards would not go away with a fight and won the game, 30-28, to win the match.

Also, the Leopards received a glimpse into Southern Cali­fornia Inter­col­legiate Ath­letic Conference play as they defeated Redlands, 3-0, on Friday.

Then, the Leopards got their spirits going after a 3-1 win over sixth ranked Trinity.

“We were able to make some changes and adapt against Trinity, which was great,” Flora said.

Jones had a match-high 18 kills while Gonzales registered a double-double with 12 kills and 11 digs.

Gonzales led the Leopards during the weekend. She ended the tournament as their MVP.

Jones and sophomore Chelsea Sleight made the all-tournament team.

Flora, who is in his 10th season at La Verne, hopes to improve as the season progresses forward.

However, Flora is pleased in what he sees in his new faces.

“It’s a new team with new dynamics that are very different,” Flora said. “Our newcomers exceeded our expectations.”

The Leopards return four starters, including standout All-American Gonzales, who was SCIAC Player of the Year. Also joining her is Crista Jones, who made the All-SCIAC team.

“Brianna and Crista were stellar this weekend, yet they still have room to grow,” Flora said.

In addition, Flora is happy with the play of some several key returners, like Sleight and junior Ashley Morgado.

Gonzales expressed that the biggest thing the team worked on last season was improving their work ethic. She said the team trained consistently year round since the end of last season.

The team is happy with the chemistry they have developed over the last few weeks.

“This is the closest team I played on. People don’t understand how close we are,” Jones said. “Each person on the team is a hard worker.”

“We love each other on the court and off the court,” Gonzales said.

The Leopards look to improve on their season records in the upcoming weeks. Nonetheless, the team looks to take every step at a time.

“Our motto is taking one game at a time, one point at a time,” Jones said.

“The next phase is really important to train and practice at a high level to prepare for conference,” Flora said.

“I really like us to remain consistent and really just focus on the little things taking it one point at a time,” Gonzales said.

The Leopards hope to continue their winning streak Tuesday. when they play the Chapman Panthers at 7 p.m. in Orange County.