By Aaron Braunwalder, Stephanie Arellanes on March 13, 2009 in Sports, Tennis 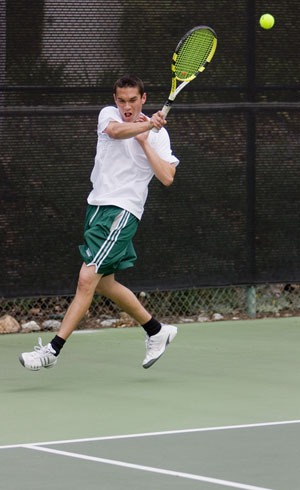 The men’s tennis team was back in action Monday, as they took on the Albion Britons of Michigan.

Albion cruised to an easy 8-1 victory over the Leopards, improving their record to 2-4.

The doubles match began with the Leopards’ No. 1 pair, Richie Delgado and Alex Muresan, facing off against Albion’s premiere doubles team of Ben Miller and Brent Parshall.

The Leopards’ top rated duo began the match with promise.

A contributing factor to the Leopards’ loss was Muresan’s pectoral injury, which he felt really affected his overall performance.

“It’s kind of tough playing when you’re injured, but I tried to work through it,” Muresan said.

La Verne came as close as 6-3, but was unable to win another set.

The match ended in an 8-3 defeat for the Leopards.

“We could have performed at a higher level,” Delgado said.

“We have to try to learn and to adapt and figure out ways to win,” Muresan said. “Once I get healed up, I’ll be back in action,”

La Verne’s No. 3 doubles team of Adrian Laygo and Joe Matsuoka lost to Adam Brown and Johnny Vinson, 8-5, to wrap up doubles play.

In singles play, the No. 1 match between Laygo and Miller went to Miller in two straight matches.

The No. 5 singles match between Rivas and Tapping ended with Tapping winning in straight sets.

La Verne’s struggles continued as the team had to move all of their singles players up a match, because of Muresan’s injury.

The Leopards came up short in every match except for the No. 2 singles match between the Leopards’ Delgado and Albion’s Parshall.

Delgado downed Parshall 10-8, which was the only La Verne victory of the day.

At the end of the day, the Albion team earned its second victory of the season, leaving the Leopards with a 0-9 overall record.

“It’s hard when you have part of your game gone when you’re hurt. It’s tough when you feel that you don’t have all your guns; I would just like to see our guys play at a higher level,” said head coach Don Flora.

The sixth place Leopards are now chasing Claremont-Mudd-Scripps who moved into first place in the Southern California Intercollegiate Athletic Conference.

Tuesday’s match at Hope International in Fullerton was cancelled and has not been rescheduled.

The Leopards will be back in action today against conference rival Claremont-Mudd-Scripps at La Verne’s home court, the Claremont Club. The match starts at 2 p.m.

On Tuesday the Leopards will be at home again, playing at the Claremont Club to take on undefeated non-conference opponent Amherst College at 2 p.m.