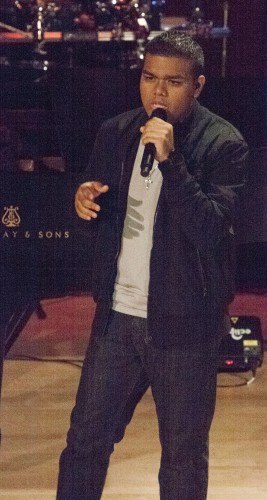 Senior music major Paolo Kespradit, a singer and songwriter, performs the song “Anthem” from the musical “Chess” at the “Paolo: The Awakening” concert Saturday in Morgan Auditorium. Kespradit is a performance scholarship recipient and has studied under Doug Frank. / photo by Stephanie Ball

The stage was set, the lights dimmed and the audience anticipated the musical performance “Paolo: The Awakening” at 7 p.m. Saturday and Sunday at Morgan Auditorium.

The predominately Christian set was the collaborative senior project of Paolo Kespradit and Anayeli Perez, both senior music majors.

Kespradit opened the show with “God of This City” by Chris Tomlin.

The upbeat Christian song set the tone for the rest of the performance with colorful lights and puffs of smoke.

After “Feeling Good” by Michael Buble, Kespradit shifted to a short classical set, which included pieces in French, German and Latin.

“I like the versatility, like how he went from contemporary to classical,” Bradlee Johnson, sophomore speech communications major, said.

“The band is great,” Johnson said. “Maybe (Kespradit) should’ve started his set list with classical, and then moved to contemporary. But vocally he is great.”

Favorite pieces ranged from “Who Am I” by Casting Crowns to “Ave Maria.”

“He has so much emotion when he sings,” she said.

“He knows it the best, sings it well and we can relate to it,” he said.

Both Susan and Greg Stout are regular attendants of the San Dimas church Holy Name of Mary Paris where Kespradit also attends.

There they have seen Kespradit’s vocal talent as he has performed in their church choir.

They attended the senior project to hear him perform more.

Kespradit’s pre-show ritual is to keep to himself to reduce the ‘five minutes until showtime’ nerves.

“Backstage I’m just by myself for myself,” he said.

“I like to have those last five minutes before going on stage to myself,” he said.

Shortly after intermission, Kespradit performed an original Christian song he wrote with trumpet and keyboard player Lagumbay called “The Awakening.”

During this time, offering baskets were passed around the audience to collect donations for Holy Name of Mary Parish.

“That church has helped me as an artist to explore a Christian contemporary route,” Kespradit said.

“My favorite song is ‘Who Am I,’” Kespradit said.

“That’s the song that changed my entire life. It’s more about the music and connecting with people,” Kerspradit said.

Half of this senior project was done by Perez who handled the business side of “Paolo: The Awakening.”

She managed the show while Kespradit and the musicians performed.

“It was hard, with ups and downs,” Kespradit said.

“Behind the scenes is a big circus backstage, but Anayeli has done a great job in making everything run smoothly.” he said.

“The process was pretty much creating what we wanted,” Perez said.

“I was more of the production— to get the funds, paperwork, contracts and making sure that everyone has what they need,” Perez said.

Although the performance lasted about 90 minutes, the time went by quickly for the performers, audience, and especially for both Kespradit and Perez since the performers kept the attention of the audience with their talent.

“I couldn’t believe it was happening right now,” Perez said.

“Walking to the stage I get nervous but once I’m on, the nerves go away,” Kespradit said.

“I feel like I’m in another world when I’m on stage. I transform and connect to the audience,” he said.

“Singing is not necessarily about singing but personality and presenting your voice,” he said.

Kespradit’s history with singing began when he was four. His serious investment in vocal talent began during his junior year of high school.

During his academic career at the University, Kespradit was a full-tuition performance scholarship recipient for music and is a member of Mu Phi Epsilon.

Perez spent her time at ULV as president of Mu Phi Epsilon for two terms and created the Music Production club.

The idea came to the duo a year ago and production for the concert took around six months to complete.

Karla Rendon contributed to this story.