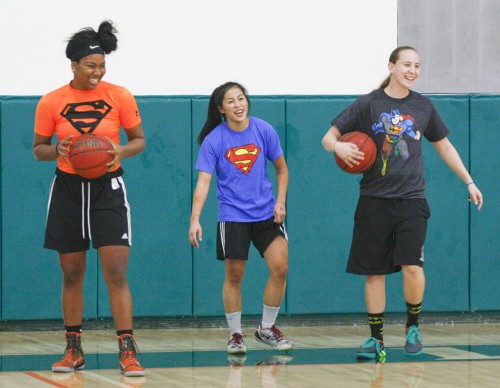 Students filled the stands of the Athletics Pavilion as the La Verne basketball teams kicked off their annual Moonlight Madness event Oct. 22.

In keeping with the superhero theme this year, the players on the men’s and women’s teams donned superhero costumes.

“It was exciting to see all those people lined up in the hallway and stands screaming and shouting,” junior guard Tony Warwick said. “It got us excited for the night and antsy for the season.”

“I was excited to introduce the teams and get their names out there and get support,” Hicks said. “And just let them know this is a fun event, come out and support your school, have a good time and have some school spirit.”

Leo FM and the basketball teams gave away free Bowl of Heaven certificates and Ontario Fury tickets to several competitors who participated in a pushup contest and dance off.

To begin the games, contestants spun in a circle and ran to the basket and attempted to make a layup.
The winner of the game was junior pubic relations major Emily Burchett.

“My motivation was supporting my fellow basketball players out there, the boys squad and the girls’ squad, and just loving La Verne spirit,” Burchett said.

“It feels really good to be back,” Arnold said. “Training coach Matt Durant worked us out a lot so my legs are tired, but thankfully to my teammates they cheered me on.”

One of the highlights of the night was a dance competition, where spectators got a chance to battle it out on the court, busting out their best dance moves.

The basketball teams were excited to kick off their season with the amount of support they received from the student body at the event.

“It motivates us a lot with having all those fan’s support, we feed off that energy,” junior guard Khaneal Mason said. “We’re going to change the culture of La Verne basketball this year.”

The men’s basketball season kicks off this year at noon Nov. 13 at Whitworth.

Alexandra de Leon can be reached at alexandra.deleon@laverne.edu.