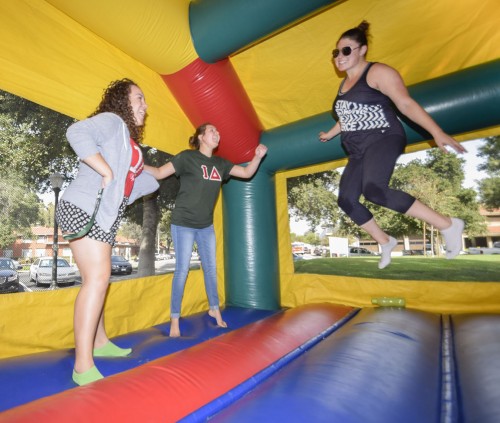 Each woman took at least five 15-minute shifts bouncing in a bounce house in order to raise money and awareness for the Cystic Fibrosis Foundation.

“The event is about doing cardio activity for 24 hours to show how hard it is for people who have cystic fibrosis to breathe,” Iota Delta philanthropy chairwoman Nicole Cuadras, a junior communications major, said.

Cystic fibrosis, a disease that causes thick buildup of mucus in the lungs, pancreas and other organs, affects approximately 70,000 people worldwide.

“When you’re living with cystic fibrosis, it’s like living through a straw,” junior business major Melanie Ryan said. “Sisters will jump for 24 hours, but after 15 minutes we’re out of breath.”

The jump-a-thon began at 11 a.m. Oct. 28 with a Juice It Up fundraiser. Later in the day they offered 21 Choices, music from DJ RVYSPRVY and jumping throughout the night.

“I think I did 12 shifts of 15 minutes,” junior music major Jessica Oleas said. “I ended up sleeping in the jumper. It was really cold at one point.”

Iota Delta members slept in a tent, on a bench or in the bounce house in Sneaky Park. Their dedication to their philanthropy got them through a very cold night.

“It was awesome because we ended up sleeping on the bench and got to stargaze and watch the sunrise,” sophomore educational studies major Rachel Klodell said.

This was Klodell’s first jump-a-thon as a member of Iota Delta and her favorite part was hearing her sisters sing at 3 a.m. in the jumper, Klodell said.

Iota Delta members sold 65 roses as a fundraiser. That number was chosen because, in order to teach children living with cystic fibrosis how to pronounce the disease’s name, they are taught to say “65 roses” because it sounds similar.

Along with the donations going to the Cystic Fibrosis Foundation, Iota Delta raised $185 by raffling off surfboards decorated by other sororities and fraternities. That money went to the Mauli Ola Foundation, an organization that teaches children with cystic fibrosis to surf.

“(Cystic fibrosis) is most common in kids,” Oleas said. “It sucks because they couldn’t play in that jumper. It’s just nice giving them a chance to be a kid.”

Several sorority members said they were unaware of the disease before they joined Iota Delta. Some learned about cystic fibrosis at sorority recruitment, while others learned about it from their sisters.

“I think it has become more personal to me,” junior psychology major Nicole Francia said. “Last year we did a C.F. walk to raise money and support.”

The La Verne Police Department and Campus Safety periodically checked on the women throughout the night to make sure they were safe.

“Being able to effectively tell people what cystic fibrosis is was my favorite part,” Cuadras said. “It’s a really hard disease to explain, and it’s hard to comprehend as well.”