By Chelsey Morrison, Hayley Hulin on December 11, 2015 in LV Life 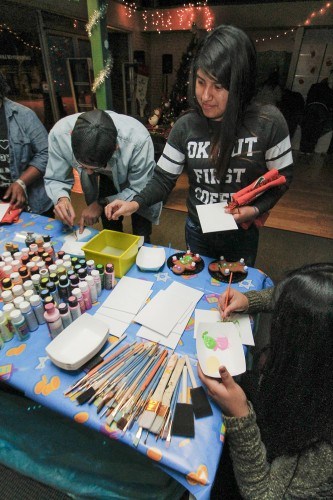 Engaging in the holiday fun, senior communications major Tyler Bertao and freshman criminology major Veronica Montes decorate Christmas cards at the Holiday Extravaganza. The Campus Activities Board hosted the event at Dec. 3 in the Bonita Building on Bonita Avenue, and CAB provided snacks and crafts from different cultures around the world. / photo by Chelsey Morrison

The Campus Activities Board hosted a Holiday Extravaganza as its final event of the semester Dec. 3 in the Bonita Building on Bonita Avenue.

As students entered the extravaganza, they were given La Verne scarves, gloves and beanies.

There were two drawings, one at 11 p.m. and the other at midnight.

Bon Appétit provided food, which was spread throughout the building on both floors.
Students enjoyed decorating gingerbread cookies, dipping treats into a chocolate fountain and drinking hot chocolate.

The Bonita Building was decorated for a variety of seasonal holidays such as Christmas, Hanukkah, Kwanza and New Year’s Day.

Multiple cultural clubs had booths at the event to represent their particular holidays.

“I know they always have the Holiday Extravaganza and it’s my senior year, so I thought I might as well go,” said senior psychology major Reem Aranki. “I think it’s cute. It’s nicely decorated and I like how they incorporated Christmas and New Year’s.”

CAB booked the Bonita Building for a week in order to prepare for the Holiday Extravaganza.

They began by clearing the space of left over chairs and tables, and then they decorated, said DeStefano.

“This event had the most prep for an event: reserving the space, decorating and getting the tables,” said senior theater major and CAB marketing chairwoman Michaela Bulkley.

“We really wanted to make it a unique experience and we wanted it to be relaxed — a fun way to go into finals.”

In order to use the Bonita Building, CAB had to get approval from the city and the fire marshal, said Associate Director of Student Life Angie Anderson.

“From a CAB perspective, I love how we came together and made an event that we all had fun doing,” Bulkley said. “Good food, good team and good vibes for the event.”